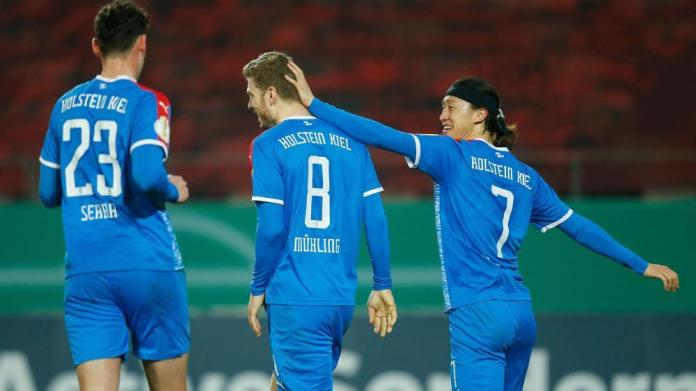 An unjustified penalty kick initiates Kiel’s victory in Essen. The second division is in the cup semi-finals for the first time.

Holstein Kiel coach Ole Werner uttered only a short cheer after the club’s historic entry into the DFB Cup semi-finals, the defeated opponent Rot-Weiss Essen struggled with a scandalous penalty. Bayern-Schreck ended the fourth division club’s fairy tale on Wednesday at Hafenstrasse and reached the semi-finals of the DFB Cup for the first time in the club’s history.

In the second quarter-final attempt after 2012, it worked with the entry into the semi-finals. The Kielers scored against the brisk outsider with a double strike within 113 seconds by Alexander Mühling (26th / foul penalty) and Janni Serra (28th). However, the penalty whistle to make it 0: 1 was a clear mistake: Essen’s Dennis Grote slid in from behind on the left in the penalty area, Kiel’s Finn Porath fell, the referee gave a penalty straight away. A contact could not be clearly recognized in slow motion. But the video referee did not intervene.

“It’s a huge scandal for me,” scolded Essen’s CEO Marcus Uhlig during the break at Sky: “You wonder if everyone was asleep there. And I’m sure: If the 911 doesn’t exist, it won’t be 2-0. “Even coach Christian Neidhart didn’t understand why the video referee didn’t intervene, but emphasized:” We can all be very proud of the cup series, we played. ”Joshua Mees conceded the third goal in the 90th minute.

Top marks from Global 2000 and WWF only for five electricity...

Germany is giving up a piece of digital competence

Podcast from Neubau: This is how the boys with Corona are

Single mothers in Mallorca are on the Corona line