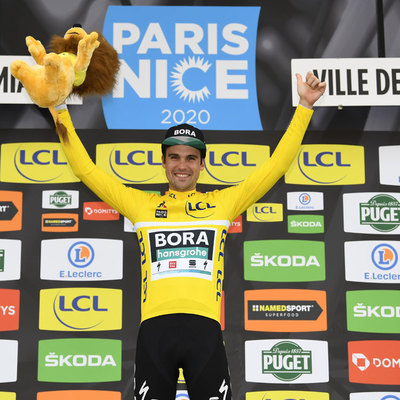 05.03.2021  | (rsn) – Even if he has never started the season so late in his professional career, Maximilian Schachmann (Bora – hansgrohe) is optimistic about defending his title at the 79th Paris-Nice. “It’s not the perfect preparation for a race like this. It would have been an advantage if I had ridden one before, but this time it will probably be the same for many other riders, “the Berliner told radsport-news.com.

Schachmann originally planned to start the season at the Valencia Tour at the beginning of February, but then the race had to be canceled due to the corona pandemic and the 27-year-old limited himself to training. “Still, it’s not necessarily bad to start a long season later,” added Schachmann.

He is confident that apart from the race cancellation, the preparation went as planned. “Fortunately, we were able to go through our training program despite the Covid situation. I stayed healthy through the entire break of the season and was able to take away a lot from my three training camps. So I’m optimistic about the upcoming races, ”he said.

At Paris-Nice, Schachmann set himself the highest goal, namely to conquer the yellow jersey as in 2020. “I will of course start with the aim of defending my title, but in view of the strong competition it will be difficult,” he said, referring to the preliminary starting list, which includes names such as that of Vuelta winner Primoz Roglic (Jumbo – Visma) or from Giro winner Tao Geoghegan Hart (Ineos Grenadiers).

“I don’t feel too much pressure, but I will go into the race very motivated. It may not be the biggest goal of my season, but it would still be nice to achieve a good result there, ”said Schachmann, for whom the“ Race to the Sun ”was the start of a challenging spring campaign with Milan-Sanremo, Tour of the Basque Country and the Ardennes classics.

Last year he got off to a perfect start when he won the 1st stage and then claimed the maillot jaune with skill, luck and the help of his teammate Felix Großschartner as far as Nice, where he became the fifth German professional in a close duel with Ties Benoot (Sunweb) was able to celebrate the overall victory.

“The first stage of last year was quite difficult due to the weather and that played a decisive role,” he looked back and added that he would like a similar scenario for this year’s start, which is another hilly stage: “If conditions allow, I’ll try to get another win there. But maybe I have to aim for another stage, let’s see how the weather looks, ”he explained.

The stage plan, which is similar to that of 2020, should play into Schachmann’s cards – and the previous year’s winner is not afraid of the competition either. “There are big names on the starting list. On the other hand, the field was also high-class last year. It’s Paris-Nice so of course it will attract very good drivers. Ultimately, a few other drivers will also start their season here, so many of us will find ourselves in the same situation, ”said Schachmann, assuming similar starting conditions.

Bo Svensson should be – FSV makes old friends a coach Maradona gets its own street – national teams