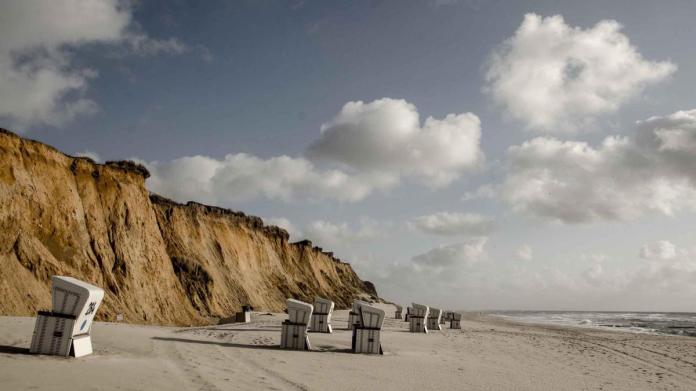 When Dirk Erdmann steps in front of his hotel, one of the most beautiful holiday landscapes that Germany’s coasts have to offer lies at his feet: the Kampener Heide slopes gently towards the north; on the left the open sea rolls, on the right the Wadden Sea bobsleigh; On the horizon, a small lighthouse peeps out from between the dunes, the cross-brand light “Red Cliff”. A fantastic view.

Hotel manager Erdmann will have him to himself again this week.

The “Red Cliff” on the largest North Sea island in Germany

The “Rungholt” on Sylt was already fully booked over the Easter days. But like all other hoteliers and restaurateurs, retailers and tourism entrepreneurs on Germany’s coasts, Erdmann had to cancel his guests after Chancellor Angela Merkel (CDU) and the majority of the Prime Ministers rejected the “low-contact Easter holiday” in their latest nightly meeting. Hotels, guest houses and holiday apartments will remain closed until further notice. It was “a big disappointment” for the entire industry, reports Erdmann, who is also the designated Sylt boss of the German Hotel and Restaurant Association Dehoga.

In any case, despite the nationwide increase in the number of infections, politicians have left a small hope for coastal tourism: under point six of the latest resolution by the state heads of government and the Federal Chancellor, the states are given the opportunity to “within the framework of temporary model projects in selected regions” individual areas open to public life.

That is the gap that Dirk Erdmann wants to use as quickly as possible on the island of Sylt, the holiday resorts on the North and Baltic Seas and basically all of Schleswig-Holstein.

The first guests are due to arrive on April 19

While Lower Saxony and Mecklenburg-Western Pomerania still do not allow tourist trips in view of the third corona wave – and significantly higher incidence values ​​- interested municipalities, districts, independent cities or regional tourism organizations can apply to the Kiel Ministry of Economics for the status of the model project with immediate effect.

The relevant documents can be submitted until April 7th. Just five days later, the state government wants to decide which regions are allowed to offer model tourism. The Jamaica Cabinet is planning to receive the first guests on April 19.

It is not just the people from Sylt who are working hard to get a nomination. Together with the northernmost German island, Amrum and Föhr are also starting; all probably under the umbrella of the district of North Friesland, which may refer to the currently lowest corona incidence value nationwide at 18.7 as perhaps the most important plus point. Büsum and the associated Dithmarschen district, the Ostseebad Eckernförde, the Schlei region, the Baltic seaside resorts on the Bay of Lübeck and the Plön district are also determined to launch a model project.

It will be a short but tough race. Disappointments are foreseeable, also because the responsible Minister for Economic Affairs, Bernd Buchholz (FDP), is unwilling to declare half of Schleswig-Holstein a model region.

The Kiel state government, said Buchholz WELT, wants to approach the topic of model projects much more “seriously” than the Saarland. There Prime Minister Tobias Hans (CDU) – at the Prime Minister’s Conference still a resolute opponent of all north German Easter holiday plans – unceremoniously declared the entire Saarland to be a model project last Thursday; Hans also announced extensive openings for the day after Easter.

A political turnaround that Buchholz sees as “embarrassing” and “grotesque”. He wants to keep both the number and the size of the model projects within a manageable range.

These are the criteria

According to the tender, only rural districts or urban districts whose incidence value was below 100 per 100,000 inhabitants in the seven days prior to the start of the pilot project should receive the award for “tourist model projects”.

Applicants must submit strict protection and hygiene concepts for the accommodation and catering establishments to be opened and ensure that all overnight guests submit a current negative test result. And the tourists also have to undergo regular tests on site in accordance with the requirements of the local health authorities.

The interiors of restaurants and other municipal and private facilities may then only be entered with a daily negative test. Comprehensive test concepts must also be drawn up for staff and day-trippers. Hardware and software are also to be provided for IT-supported contact tracking in all tourist businesses and public facilities, sufficient staff to enforce the distance and hygiene rules and suitable scientific support for the preparation of the model project.

In addition, the participants must undertake to terminate the project immediately in the event of a corresponding instruction by the responsible health department, for example due to an increasing seven-day incidence. “We want to prove,” says Buchholz, “that safe tourism is possible in times of the Corona.”

In view of the ongoing pandemic, the uncertainties associated with mutations and possible resistances, this is urgently required.

“If you don’t take us, I don’t understand anything anymore”

Not only the drastic increase in the number of personal bankruptcies in Schleswig-Holstein in February indicates that Corona will leave clear wounds in this economic sector, which is so important for northern Germany’s coastal regions. After the cancellation of the Easter holiday, so it is said between Usedom and Travemünde, between Scharbeutz and St. Peter Ording in unison, numerous smaller tourism companies in particular now fear for their existence.

Even in the stationary retail trade of many seaside resorts, reports the Timmendorfer tourism director Joachim Nitz, the shops were left with their goods. Five shops in the best Timmendorfer beach location have already given up. “It is possible”, as Economics Minister Buchholz summed up the situation in the Kiel state parliament last week, “for bare survival”.

Even larger businesses that were economically sound before the outbreak of the Corona crisis, such as Dirk Erdmann’s “Hotel Rungholt” or the “Heimathafen” hotel chain run by the Hamburg entrepreneur Jens Sroka, are gradually reaching their limits after a five-month lockdown. “It’s starting to hurt,” reports Erdmann, referring to the financial situation of his company, the Easter business that has been canceled by Berlin politics and the nationwide rise in incidence values.

For weeks, he has been committed to making the island fit for tourism under Corona conditions, together with other companies, local politics and local aid organizations.

According to the Sylt opening plans, travel and accommodation should only be possible in future with a valid PCR test. Locals and commuters also have to have themselves tested for the virus on a regular basis – twice a week if possible. If the worst comes to the worst, access to events and the interiors of restaurants and pubs should only be possible with a daily test result. The Luca app is used to track contacts. So all measures that correspond to the tender.

Four test centers have already been put into operation across the island, three more, including what is probably Germany’s first cycle-in test station for cyclists. From now on, tests will also be carried out in the pastorate of the Wenningstedt parish – and not just before the services. Those responsible estimate that the test capacities at the beginning of the model project would be sufficient for 40,000 to 50,000 guests.

“If you don’t take us away,” says Dirk Erdmann, referring to the Kiel decision on the future model regions, “then I don’t understand anything anymore”.

BVB now ugly and successful? Malocher style instead of spectacle

Daimler is growing double-digit in China – optimistic for 2021 |...

“Enemies” on ARD: A little less would be a lot more