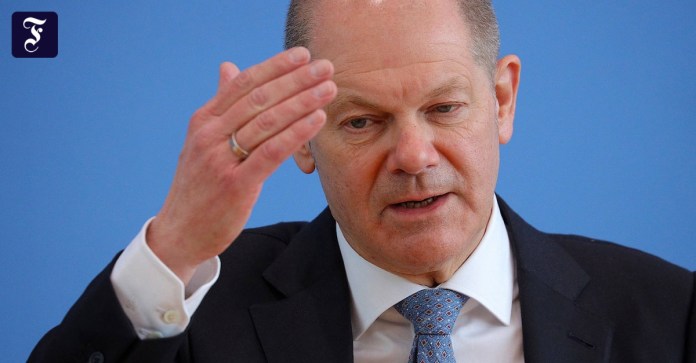 UOriginally, Federal Finance Minister Olaf Scholz (SPD) was supposed to explain the key figures of the federal government’s new budget and financial planning after the cabinet meeting on Wednesday. But after the sudden cancellation of the planned Corona special holidays around Easter by Chancellor Angela Merkel (CDU), the record numbers slipped down the interest scale of the capital’s press – which allowed the SPD candidate for chancellor to present his ideas of a good pandemic policy all the more detailed.

But the budget planning previously decided by the cabinet has it all: According to Scholz, it can only be financed with the help of higher taxes – although it only partially captures the expected increase in social spending. The financial needs will be even greater if the upcoming government wants to stabilize social contributions at 40 percent of gross wages. In addition to the current planning, further double-digit billions would be expected.

Scholz predicted that “growing out” of the newly borrowed debt, financing through automatically increasing revenues in the upswing, would be possible “in the medium term”. “But it is clear that the next legislative period will be challenging.” The additional income required by 2025 would “not all come from growth processes,” he said. “That will only work with a more just and fairer tax system.” For his party, this means higher income taxes for high earners, higher taxes for corporate heirs and a wealth tax, as can be seen in the draft election program approved by the SPD executive committee.

However, an internal list from the Ministry of Health shows that this framework is unlikely to be adhered to if the future government does not cut hard on the welfare system: According to this, financial requirements that have not been taken into account for health and long-term care insurance alone in the coming year will be 18 billion euros, if one is through higher tax subsidies whose contribution rates want to keep stable. By 2025, the subsidy requirement for this alone would increase to 27.5 billion euros.

Together with other items, according to the Ministry of Health, the gap even amounts to a total of 25.8 billion euros for 2022 and 35.5 billion euros for 2025. At the same time, further subsidy requirements from the pension insurance are foreseeable for the coming years, provided the new government does not cut pensions or the Wants to increase the pension contribution from 18.6 percent today to more than 20 percent. In November, before the corona situation had deteriorated in the meantime, the government had forecast a contribution rate of 19.9 percent for 2024. The 40 percent mark would have been broken.

Scholz replied very briefly to questions about these issues and his financial planning: “The financial needs that can be calculated today have been taken into account,” he said. At the same time, he painted an overall positive picture of public finances. For example, despite the large number of new debts, German national debt will still be lower at the end of 2021 than after the 2008/09 financial crisis: at 75 percent of gross domestic product (GDP), the ratio will then be around 7 percentage points lower than in 2010.

However, the starting level in the pre-crisis year 2019 with a rate of 59.6 percent was at the same time a good 4 percentage points lower than in the pre-crisis year 2007. And with the federal government’s planned new debt of 81.5 billion euros for 2022, the rate should increase even further. However, Scholz pointed out that, at 75 percent, Germany is still in better shape than the other six industrialized countries in the G7 group would have been before the crisis.

The households of the Union faction in the Bundestag see the financial policy, however, because of the incomplete planning of the minister before dark times. “The key figures presented for households from 2022 onwards are not the whole truth,” warns its chairman, Eckhardt Rehberg. “The actual expenses and deficits are significantly higher than stated.” As it is, however, the problem solving is only postponed into the future. After the general election, the new coalition will therefore have to make a “comprehensive cash fall”, predicts Rehberg. “The challenges for budget policy in the coming years are enormous.”

Republicans too liberal: Biden’s personal details cause trouble with the Senate

Stuttgart-Hedelfingen: Smart slides down snow-covered vineyard after an accident escape –...

Pension funds with 2.55 percent plus

Free with “public transport” to the mass test

Why ALDI advertises its firecrackers despite a sales ban – BZ...