Education has priority – this sentence has been heard from many politicians in Germany for months. Mostly it is provided with the note that the first lockdown clearly showed how urgently children and young people need school – not just as a place of learning, but of togetherness.

But all of the confessions could not prevent the second lockdown in winter. And because the numbers are rising again, the current, tentative opening rate is already in question again, in some districts in North Rhine-Westphalia, for example, the classes are already returning to distance learning. We want classroom teaching, they say, but there is no other way with the numbers.

If you look to France and Switzerland, you see: Yes, it works.

In Switzerland, daycare centers and schools have only been closed for around eight weeks since the outbreak of the pandemic: from mid-March to mid-May 2020. In this phase, the Swiss Federal Government took over the helm on the basis of the Epidemic Act and was able to govern. Fighting the pandemic is now primarily a matter for the 26 cantons again. You decide what happens to the schools – and demonstrate relative agreement on this issue: face-to-face classes are only allowed to take place with a protective concept, in secondary schools there is a national mask requirement, and in some cantons pupils from the fourth grade onwards have also had to wear a mask since February. But with a few exceptions limited to a few weeks, no canton has closed its daycare centers and schools again.

So far, this strategy seems to be working for Switzerland. The country was hit hard by the second wave of pandemics: at times hardly any other European nation recorded so many new infections per capita, and Switzerland also took a top position in terms of excess mortality. But at the end of December, the Swiss Confederation began to gradually tighten its measures, whereupon the infection rate approached that in Germany – without closed schools. The seven-day incidence in Switzerland is currently around 120 and in Germany around 108.

The virus does circulate in schools, but there are not many outbreaks

Current studies from Switzerland suggest that this is not just a happy coincidence. “Our research shows that there were only very few infection clusters in schools with protective concepts by autumn 2020,” says Milo Puhan, epidemiologist at the University of Zurich. His research group examined 2,500 children at 55 schools in the canton of Zurich – once in summer 2020 and once in autumn. This double antibody check showed that two percent of the students were infected with the coronavirus by June and eight percent by November. So the virus does circulate in schools – but there doesn’t seem to be many outbreaks. “We only saw a few classes with more than three infected students,” says Puhan.

Puhan is a member of the Covid-19 task force that provides the Swiss government with scientific advice. On the basis of research in Zurich, among other things, the committee recommended in December that schools be closed “only as an extreme measure in the event of high infection rates”. “The basic right to education must be preserved as far as possible.” So far, the Federal Council and cantonal governments have followed the advice of researchers, and school closings have only played a subordinate role in the public debate.

When France was still in the first lockdown in spring 2020, the media speculated that it would take until September 2020 for schools to return to regular classes. Accordingly, President Emmanuel Macron’s decision to reopen schools in May, shortly after the curfew ended, was taken by surprise. France stuck to this course a year later: schools were the last to close. 16 departments in the country are currently in a third lockdown, including the capital Paris, where the incidence is 500 infected people per 100,000 inhabitants and the utilization of intensive care units is more than 110 percent. There are movement restrictions and a night curfew – but the schools stay open.

In the meantime, the open schools have become objects of national pride. When Prime Minister Jean Castex announced the start of the third lockdown last Thursday, he also stressed that “our children’s education will be protected”. This is “a decision that sets us apart from many of our neighbors,” said Castex. He pointed a finger at Germany: “For three months they have been living in a strict lockdown in which schools and kindergartens are closed”. That was not entirely true. But it is noticeable: France has been restricting the freedom of movement of individuals much more than Germany since the beginning of the pandemic – with one exception: the schoolchildren. The face-to-face tuition is considered non-negotiable. Education Minister Jean-Michel Blanquer emphasized again on Sunday that France would manage to escape the “global educational catastrophe” by keeping schools open.

Some parents no longer knew how to feed their children

School has a different status in France than in Germany. Schooling is compulsory from the age of three, and it goes without saying that even small children are looked after by the state for the entire day. During the first lockdown, the devastating effects of school closings on poor families became apparent. Some parents no longer knew how to feed their children when the cheap school lunch was no longer available. The second lockdown showed that it is possible to reduce the number of infections without closing schools. In November, the individual’s freedom of movement was again restricted to one kilometer around their own apartment, but the students continued to attend classes. The incidence could be reduced from 500 to 100 within three weeks.

But now the number of school classes that have to be closed due to Covid diseases is also increasing in France. Currently there are 2018 classes, in the previous week there were 833 according to the Ministry of Education. Another problem is the many teachers who are absent due to a Covid-19 infection. On Tuesday, President Macron announced that from mid-April on, teachers could be one of the professions that will be given priority in vaccination. Provided there is sufficient vaccine available.

Julian Nagelsmann puts pressure on the game against Basaksehir 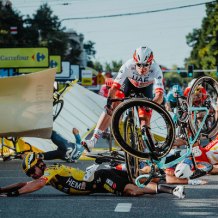 Spring in February: the north is happy about the sun |...