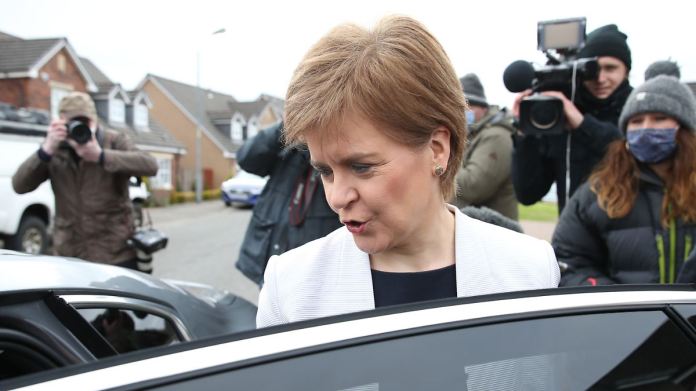 Turbulent days for Prime Minister Sturgeon. First, her misconduct in connection with allegations of abuse against her predecessor is accused. Then follows a vote of no confidence. Everything is thrown out. The attacks even seem to strengthen them.
Six weeks before the Scottish general election, Prime Minister Nicola Sturgeon won a vote of no confidence. A majority of MPs voted against the Conservative Party’s proposal in Parliament in Edinburgh. The opposition party accuses Sturgeon of having misled parliament. However, an independent report confirmed that she had not made a mistake. For this reason, even before the vote in parliament, it was hardly conceivable that Sturgeon would really overthrow the proposal of the opposition conservatives. “If you think you can drive me out of office, you are mistaken and wrongly judging me,” said Sturgeon, confident of victory. “If you want to depose me as head of government, do so in an election.” She has already rejected the committee’s allegations as being politically motivated.

“Overall, Nicola Sturgeon seems to have come off pretty well,” said Kirsty Hughes, director of the Scottish Council on European Relations think tank in Edinburgh. Renowned political scientist John Curtice said the allegations against Sturgeon had collapsed. The background is an affair with Sturgeon’s predecessor Alex Salmond. Several women had accused Salmond of attempted rape and sexual harassment, but the former head of government was acquitted just over a year ago. Now the question arose whether Sturgeon acted correctly in the case – and when she found out about the allegations.

Salmond accused his former confidante of trying to ignore him politically, and the Conservatives eagerly threw themselves into the argument. Sturgeon, however, denied all allegations, and the independent report confirmed them. Now the head of government can devote herself to the important regional election again. Your Scottish National Party (SNP) is hoping for an absolute majority in the vote on May 6th, in order to then step up its call for a new independence referendum. But after the SNP had at times led with a clear lead in surveys, the race is now open again.

Political scientist Curtice suspects that the internal party dispute is likely to cost the SNP two to three percentage points. “It was obviously a drawn-out, messy and politically damaging affair,” said expert Hughes. It is important that the election campaign can be in the foreground again, said Curtice. “Independence, Brexit, coronavirus: these questions should now be dealt with again.” These topics speak especially for Sturgeon. Your crisis management in the Corona crisis is valued by the Scots across party lines, as surveys have repeatedly shown.

With their goal of bringing Scotland back into the EU, Sturgeon also hits a nerve – because a clear majority of Scots rejects Brexit. In addition, your most important opponent, the British Prime Minister Boris Johnson, is extremely unpopular in Scotland. Probably because of this, Johnson’s spokeswoman does not want to comment on the events in the north.

Meanwhile, the prime minister is preparing for a tough debate. The government in London insists that it will ultimately decide whether Scotland can vote on secession for the second time after 2014. The first time a slim majority voted against the separation – and Johnson strictly rejects a repetition. But the SNP is of the opinion that the signs have changed because of the Brexit and that the Scottish Parliament also has sufficient powers. The regional government has already presented a draft law on which question should be asked in a referendum. Enough material for the election campaign is guaranteed.

German protection of the constitution is not allowed to observe right-wing...

“Perfidious when words are intentionally twisted”