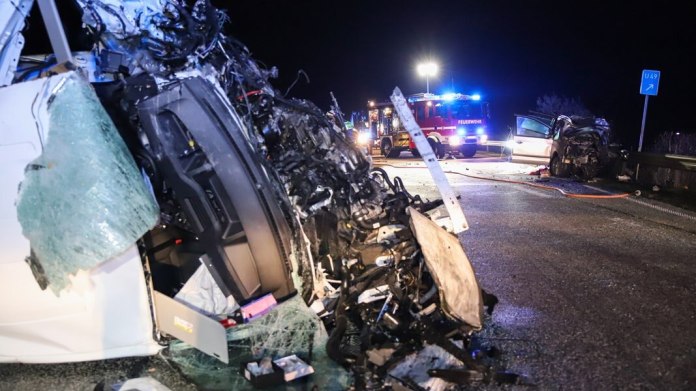 During the night a minivan (Ford Galaxy) collided with a fully occupied minivan (Ford Transit) on the B205 on the section between Altonaer and Boostedter Straße. According to the police, there were six people in the minivan. The 40-year-old driver and the passenger in the van did not survive the accident; they died at the scene of the accident. “So far, for an unexplained cause, the Galaxy driver left the lane and drove into oncoming traffic, where he collided head-on with the Ford Transit. Unfortunately, the driver and his passenger in the Galaxy were fatally injured in this accident,” explains Police spokesman Sönke Petersen.

B205 blocked for seven hours

Nine other people were injured in the accident – some of them sometimes life-threatening, the police said in the morning. Ambulances took them to various hospitals. Because one of the vehicles started to burn again, the police and fire brigade had to move out again. The B205 between Altonaer and Boostedter Straße was completely closed for more than seven hours. The property damage amounts to around 40,000 euros.

VW: Money and free time – this is what the union...

Wedding at first sight: Decision of the autumn couple: They want...