Unwanted operations, childhood abuse and unintentional exposure in front of the audience: More and more terrible details from the life of Sharon Stone come to light through the publication of her biography.

In her new biography “The Beauty of Living Twice”, Sharon Stone (63, “Casino”) shows in many places how she has been a victim of unscrupulous men all her life – whether on the operating table, in front of the camera or also in one’s own family.

Sharon Stone was molested by her grandfather

Stone writes that she and her sister Kelly were sexually molested by their grandfather as toddlers – even with their grandmother’s knowledge, as Stone describes it. She would have locked the sisters in a room with her grandpa so that he could abuse her. The nightmare didn’t end until Stone was 14 and her grandfather died. She describes how she touched him in the coffin to make sure he was dead. “I nudged him and the bizarre satisfaction that he was finally dead hit me like a ton of ice cream. I saw [Kelly] on and she understood. She was eleven and it was over, “said Stone.

Elsewhere in the biography, Stone describes that she did not voluntarily film the famous “Basic Instinct” scene in which she crosses her legs and shows her vagina to the viewer. So she was told she had to take off her panties for the scene, but you wouldn’t see any intimate parts: “I was told, ‘We don’t see anything – you just have to take off the panties because the white reflects the light and we know that you’re wearing. ‘”In her book, Stone says she was aware that there were multiple statements about the scene,” but since I’m the one with the vagina in question, let me say, the other points of view are bullshit. ”

Another shocking story from Stone’s life was published in the Times yesterday. According to this, the actress had benign tumors removed from her breast in 2001 – and on the “occasion” the doctor decided to enlarge Stones’ breasts without her consent. “When the bandage was removed, I found my breasts had grown a full cup size,” said Stone. In the doctor’s opinion, a larger bust would have fitted her hips better.

Schwarzl is rid of the “vice”: After being voted out, many... 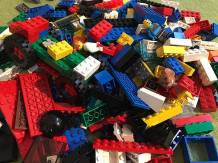 LEGO dispute: Paderborn businessman gets a lot of solidarity