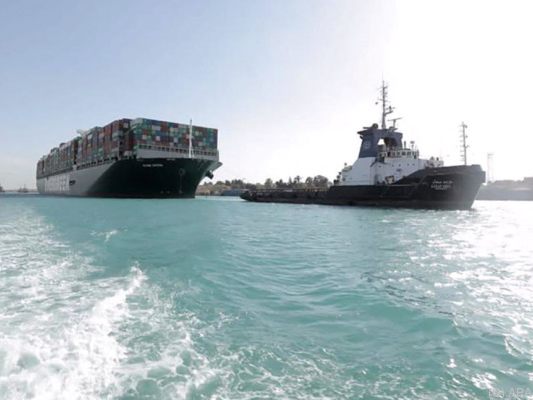 After days of blockade by a transverse giant freighter, ships are moving again in the Suez Canal. By Tuesday morning, 113 ships are to leave their waiting positions and cross the canal, said Osama Rabie, head of the canal authority, on Monday evening after media reports in Cairo. The first ships started their course early on Monday evening.

According to Rabie’s words, work is now being done “around the clock” to clear the congestion of almost 370 ships waiting for roadstead on both sides of the canal because of the blockade. Despite the end of the blockade, according to information from shipping companies, it can still take several days until the entire queue has cleared. Rabie said the backwater should be cleared within four days if possible. As a result of the blockade, the sewer authority lost up to 14 million dollars (around 11.9 million euros) in revenue every day.

The container ship “Ever Given” was completely floated again on Monday afternoon. According to the rescue company Boskalis, helpers had dredged away around 30,000 cubic meters of sand. The Dutch company had supported Egypt in uncovering the transverse freighter.

The shipping service provider Leth Agencies also reported on the successful recovery of the huge freighter. After the salvage, the 400-meter-long ship moved on its own for the first time on the canal, as a photographer from the German Press Agency observed. Sirens accompanied the journey.

The “Ever Given” is to be examined after it has been recovered from the Great Bitter Lake at the northern end of the Suez Canal. It was initially unclear when she could continue her journey to Rotterdam. Rabie said the investigation into the incident must first be fully completed. The freighter, which is about the size of the Empire State Building in New York, ran aground in a sandstorm on Tuesday last week.

The German industry had warned of bottlenecks and pressure on their supply chains because of the blockade. The Suez Canal is an important trade route for the chemical and automotive industries, among other things.

The Suez Canal connects the Mediterranean with the Red Sea and thus offers the shortest route between Asia and Europe. According to the canal authority, almost 19,000 ships passed through the waterway in 2020.

On the trail of urban spirits

Denmark will stop oil and gas production in the North Sea...

Turnaround in sight – left clearly wins election in Kosovo according...