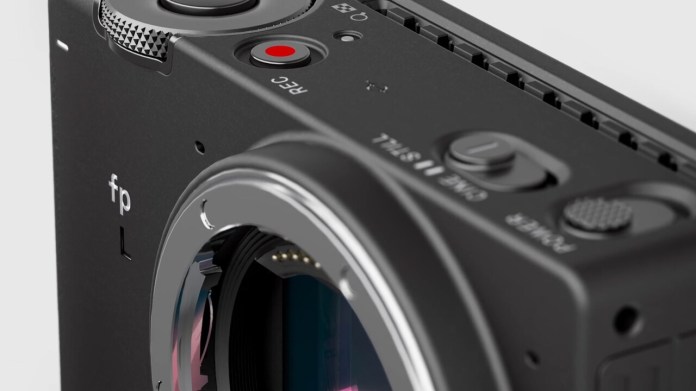 The smallest, mirrorless full-frame camera Sigma fp is followed by its successor, the fp L, just one and a half years after its launch. With the same “pocket concept”, the fp L now offers 61 megapixels and improved autofocus.

Full size for your pocket

With an identical case size of 112.6 × 69.9 × 45.3 millimeters and a weight increase of only five grams (427 grams), the Sigma fp L offers some innovations compared to the relatively young predecessor model. First and foremost the new sensor, which now offers a resolution of 61 megapixels instead of 24 megapixels. Along with the higher resolution, the fp L also offers a new feature with a crop zoom that cuts images directly inside the camera and thus emulates a digital zoom.

Another big innovation is the hybrid autofocus, which now works on a phase and contrast basis. The Sigma fp only offered the latter focus variant. Due to the resolution, however, the maximum serial image speed drops from 18 to 10 images per second. The Sigma fp L records videos in DCI-4K at 24 frames / second, UHD at 30 frames / second or in Full HD at up to 120 frames / second. A special video mode changes the camera interface at the push of a button and thus provides the most important settings and parameters. The streaming function by means of integrated USB Video Class, which the predecessor fp offered as the only full-frame camera at the time, has been adapted so that the fp L does not need an extra power supply, but now also takes place via USB-C.

At around 3.1 inches, the screen fills almost the entire rear. There is just as little a viewfinder as there is a pivoting or rotating mechanism. A viewfinder can, however, optionally (Sigmar EVF-11) be flanged to the left part of the housing via USB for around 650 euros.

Like the Sigma fp, the Sigma fp L relies on the L-bayonet, which is operated jointly by Leica, Panasonic and Sigma. The Sigma fp L will go on sale in April at a price of around 2,300 euros. In a bundle with the electronic viewfinder EVF-11, just under 2,800 euros are due.

Recall of water: Three types of threatening pathogens found – but...

The top performer of the 28th round comes from Dornbirn! ... Do Jupiter and Venus merge into a Christmas star? |...