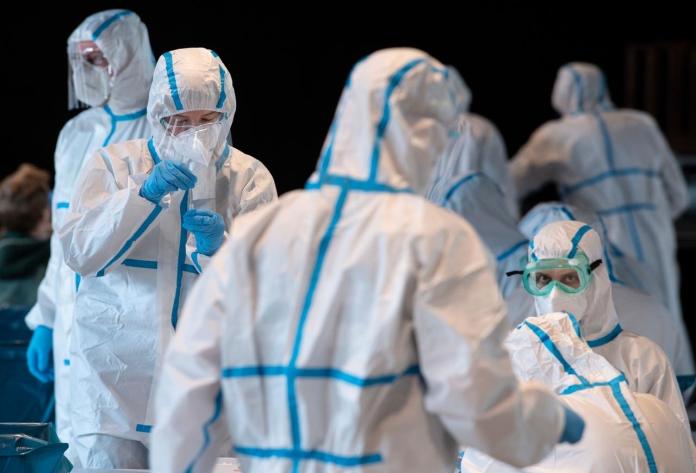 The health authorities in Germany reported 20,400 new infections to the Robert Koch Institute (RKI) in the last 24 hours. According to the RKI, that’s a good 4,000 more than a week ago. 157 infected people died in Germany within 24 hours. The seven-day incidence has also risen sharply. While the value on Friday was 119 – two weeks ago even 76.1 – it reached 124.9 nationwide on Saturday morning.

The RKI last registered more new corona infections per 100,000 inhabitants within seven days on January 19. At that time the incidence was 131.5. Experts also attribute the recent sharp rise in the number of infections to the spread of contagious coronavirus variants.

In view of the increasing number of cases, intensive care physicians warned against easing after Easter, such as the Saarland is planning. The SPD health expert Karl Lauterbach made a similar statement. He told the Funke newspapers that it was clear that the number of infected people was continuing to rise. Some countries are therefore pulling the emergency brake again with more stringent measures.

The RKI has counted 2,755,225 detected infections with Sars-CoV-2 in Germany since the beginning of the pandemic. The actual total is likely to be higher as many infections go undetected. The RKI stated the number of those who had recovered at 2,477,500. The total number of people who died with or with a proven infection with Sars-CoV-2 rose to 75,780.

The R-value also continues to rise

According to the RKI management report on Friday evening, the nationwide seven-day R-value was 1.14 (previous day 1.08). This means that 100 infected people theoretically infect 114 more people.

The value represents the occurrence of the infection 8 to 16 days ago. If it is below 1 for a longer period of time, the infection process subsides; if it is consistently higher, the number of cases increases.

You don’t have to throw away expired food straight away

Anthony Fauci is celebrating his 80th birthday – Americans trust him...

Danni and Ennesto – is their relationship really just fake?

Intel helps with game optimization on more than eight cores

BVB share slightly up: On course for the last sixteen: Champions...

Top game in Leverkusen, Bavaria greedy for top of the table