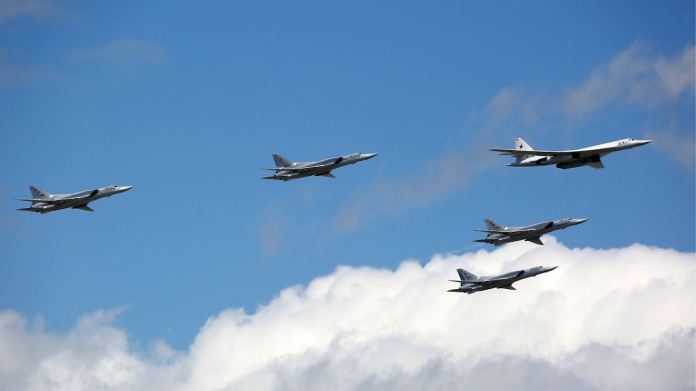 Russian fighter planes keep appearing along the NATO border. At the beginning of the week, however, the defense alliance registered an unusually high number of Russian jets. Six different squadrons can be identified within a few hours.
According to the military, an unusually large number of Russian military aircraft appeared near the NATO alliance area at the beginning of the week. During interception maneuvers over the North Atlantic as well as the Black Sea and the North and Baltic Seas, six different groups with bombers and fighter jets from Russia were identified on Monday within less than six hours, NATO said. This was an exceptional peak value.

According to the Alliance, the identified Russian aircraft included supersonic Tupolev Tu-160 Blackjack bombers and long-range Tupolev Tu-95 bombers. The interception maneuvers were flown by pilots from Norway, Great Britain and Belgium as well as from Turkey, Romania, Bulgaria and Italy, it said.

Fighter planes from NATO countries fly hundreds of missions every year to identify and monitor Russian aircraft that are in international airspace. During the so-called alarm starts, the pilots with their fighters have to be in the air within a few minutes, for example by visual contact to determine whether a suspicious aircraft poses a threat. If necessary, this could then be stopped by force.

In the past year, NATO warplanes reported more than 400 alarm launches. 350 of the missions involved the identification and surveillance of Russian aircraft. According to the defense alliance, they often do not provide any information on their position and altitude, do not submit a flight plan or do not communicate with air traffic controllers. This poses a potential risk for civil aircraft.

Buenos Aires says goodbye – “You will miss Maradona the rest...

Samuelsson wins – Germans miss out on the podium