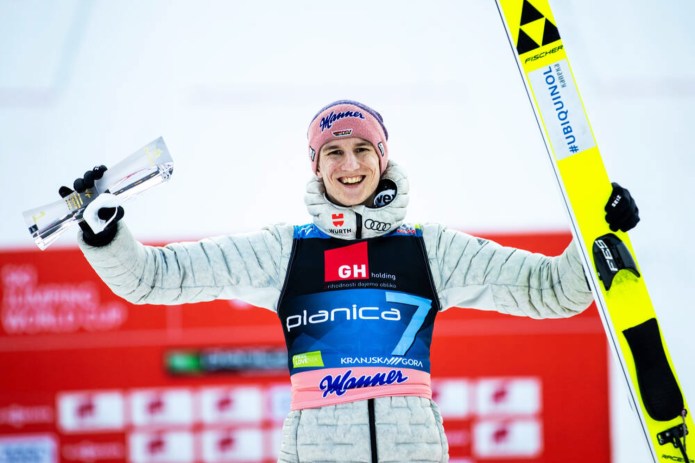 Karl Geiger is also the best man in the last competition of the season: With a strong flight in the final, the Oberstdorf man prevailed against the half-time leader Kobayashi. Markus Eisenbichler also lands on the podium.

With flights at 231 and 232.5 meters, Karl Geiger secured victory in the last World Cup competition of the season. The ski flying world champion from Oberstdorf scored a total of 459.3 points on the Letalnica ski flying hill in Planica, Slovenia, prevailing against Ryoyu Kobayashi, who came to 242 and 217 meters (452.4 pts). Third place went to Markus Eisenbichler with 221 and 230 meters (447.9 pts).

“Finally out of the small hill jumping event”

For Karl Geiger, who only became world ski flying champion on the same hill in December, it is the third World Cup victory this season. “Today was a terrific day. Now he is finally out of the small hill jumping competition ”, said national trainer Stefan Horngacher about the Oberstdorf, who had long been considered a specialist for small hills. Less than two hours earlier, his team had already celebrated victory in the team competition that they made up for.

In addition to Geiger and Eisenbichler, Pius Paschke also presented himself well in eleventh place, achieving a new personal best in the first round with 230 meters. Severin Freund finished 25th at the end of the season, Constantin Schmid and Martin Hamann were 27th and 28th respectively.

The Slovenian team just missed the podium they had hoped for in the last competition, with Domen Prevc finishing fourth as the best man in the host country. Daniel Huber was fifth as the best Austrian, his compatriot Michael Hayböck did not get beyond tenth place after a brilliant 245 meters in the first round.

The longest flight, however, was shown by Bor Pavlovcic, who came to 249.5 meters in the first round and was seventh behind the Japanese Yukiya Sato (6th). The two Norwegians Johann Andre Forfang and Robert Johansson finished eighth and ninth respectively.

On the other hand, there wasn’t much to gain for the Polish team, which disappointed at the end of the season. Piotr Zyla was the best Pole only 13th, Four Hills Tournament winner Kamil Stoch took 20th place.

After the final ski flying, the ski jumpers say goodbye for a longer break. According to the preliminary calendar planning, the next competitions are planned for mid-July – then the Summer Grand Prix is ​​to open in Wisla, Poland.

Wayne Rooney is named after his debut as head coach of...

Entry stop: around 120 passengers from Great Britain stay overnight at...

Samsung Galalxy A52 with tariff in the Telekom network for 0...