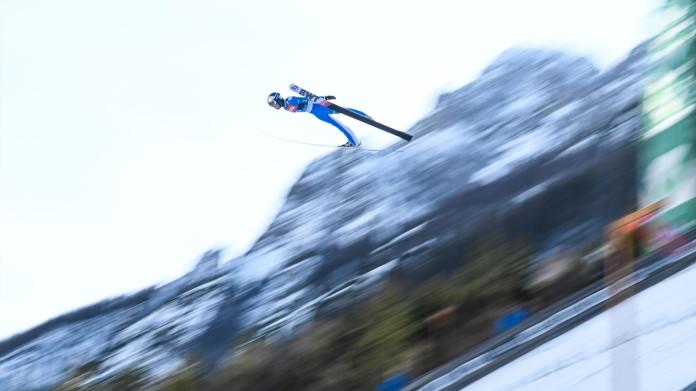 The terrible fall of Daniel Andre Tande was also stuck in the heads of everyone involved in the team competition of the ski flyers on Saturday.

The penultimate competition of the season in Planica was characterized by long breaks due to the turbulent wind – and the first round was canceled. “It’s too dangerous, it changes so quickly. We don’t want to take any more risks,” said national coach Stefan Horngacher on “ZDF”. He had previously withdrawn the participation of the DSV-Adler after two jumpers.

Competition should be rescheduled on Sunday

“It wasn’t that bad”: Eisenbichler is again in the top 10

Especially the fall of Tande, who was supposed to wake up from the artificial coma after a day and a half on Saturday morning, was omnipresent. “Of course, the boys also have the fall of Tande in their bones,” emphasized Horngacher, the wind changes unpredictably quickly, is gusty and extremely dangerous for the pilots.

A total of 21 ski jumpers fought their way over the legendary “Letalnica” on Saturday under the most difficult wind conditions before the competition was canceled. On Sunday (9.00 a.m.) the team competition should be rescheduled in one round. The athletes would stand up too long and “lose the feeling in their legs”, complained Horngacher.

The Norwegian national coach Alexander Stöckl was also upset. “I’m irritated by the performance of the jury. Marius Lindvik had to go off the bar six times,” said the Austrian on “ZDF”. He asked the jury to allow Lindvik to prepare again, but nothing happened.

“The wedges were no longer in place, and he no longer had the feeling. You could also see that during the jump. That was incomprehensible to me. That is irresponsible,” said Stöckl angrily. The competition was only interrupted when the coaches intervened.

Geiger wants to “put everything in” on Sunday

“We are acting very responsibly here, the conditions are very tricky,” said race director Sandro Pertile from the FIS World Federation. In any case, the Norwegian team was unsettled after the crash landing of their teammate Tande on Thursday.

The 27-year-old is on the mend at the Ljubljana University Hospital. “Because of the fantastic first aid and the excellent doctors, I can assure you that Daniel’s health is developing positively. Everything looks promising,” said Norwegian sports director Clas Brede Braathen.

Already on Friday with the victory of ski flying world champion Karl Geiger, the competition had to be stopped after one round due to gusty winds. On Sunday (10:30 a.m. at Eurosport 1) the long World Championship winter will be concluded with a single flight and the team competition. “The weather forecast is better for tomorrow. But you have to wait, in the mountains you can never look that far ahead,” said Horngacher.

The DSV-Adler would be “definitely prepared”, emphasized the national coach, and “Karl is in a very, very good position”. Geiger fights with the Japanese Ryoyu Kobayashi for the small crystal ball in the Ski Flying World Cup. “I’m hot and I really like the hill. You can never set yourself a goal of victory because that has to happen on the right day. But I’ll put everything into it,” said the man from Oberstdorf.

Geiger saves car keys: “Nobody should see that”

Moderna vaccine approved in the US

IO Interactive is looking for employees for 007 game project

Merkel’s Corona summit – country leaders already attack each other BEFORE...

Guests jump out of the window – two injured