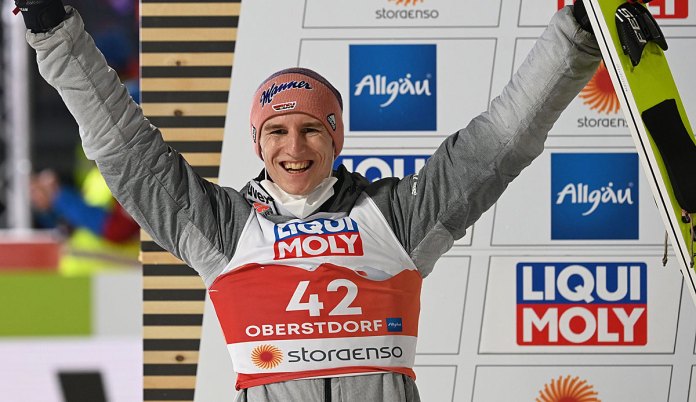 Karl Geiger jumps to bronze in the victory of Austrian Stefan Kraft on the large hill and thus to the third World Championship medal in Oberstdorf. Defending champion Markus Eisenbichler crash-lands.

When Karl Geiger finally held the missing piece of his Oberstdorf medal collection in his hands and also knew that his badly fallen friend Markus Eisenbichler was in excellent health, his ski jumping world consisted of sheer luck. “What happened here is pretty impressive,” said the big German winner of the home World Championships after his third place on the large hill: “I swallowed quite a bit at the ice egg – but when he got up and got the snow out of his beard peeked, I knew he was okay. ”

In an emotional hill thriller in the wild snowstorm, defending champion Eisenbichler landed spectacularly nose first on the slope during his race to catch up. Eyewitness Geiger (“Oh dear, I thought it could end badly”) then jumped from sixth place onto the podium in an act of merciless nerve strength with a “great second jump, an absolute rocket”. The 28-year-old only had to bend over to the new world champion Stefan Kraft from Austria and the Norwegian Robert Johansson.

“I’m overjoyed with bronze,” said Geiger who – after gold in mixed and silver on the normal hill – was now involved in three of only four German medals in Oberstdorf. And on Saturday (5:00 p.m. / ZDF and Eurosport) there will be another team decision: “We want to really attack, give everything,” said Geiger.

Kraft, already double world champion in Lahti in 2017 and incapacitated this winter by a corona infection, among other things, won on Friday with jumps of 132.5 and 134.0 m (276.5 points) ahead of Norwegian Robert Johansson (272 , 1) and Geiger (267.4), who reached 132.0 m twice. “World champion, unbelievable. I talked myself into it until I could believe it myself,” said Kraft, who could hardly believe his luck.

Eisenbichler (231.8) was only 16th after a weak jump to 116.5 m at halftime. The second run went much better with 134.0 m, but the 29-year-old tipped over on landing and landed on his stomach in the snow. Eisenbichler was uninjured, but the race to catch up was suddenly over. The fall cost him around 20 points, and without this he would not have won the medal.

“I’m happy that Karl then won the medal, that’s the most important thing. But I have just been served properly myself. It sucks, I was in really good shape, and then it puts me on the waffle. That annoys me “, said Eisenbichler, who won the title ahead of Geiger in Innsbruck in 2019 and was only 17th in both Oberstdorf singles:” It doesn’t matter, tomorrow it goes on. And if something hurts me, I’m the most dangerous. ”

The warning from national coach Stefan Horngacher had not reached the regular German number one. “The snowfall is not that bad, but when landing you have to be extremely careful not to fall over,” Horngacher said on ZDF – he was bitterly right.

The original top favorite Halvor Egner Granerud had to follow the competition from quarantine. The 24-year-old, who won eleven competitions this winter and has been determined ahead of time as the winner of the overall World Cup, tested positive for Corona on Wednesday and is now showing clear symptoms.

“Complete emptiness” for Stephie Stark after her surprising final-off

Corona Vaccines and Mutations: What the AstraZeneca Disaster Means in South...

New games that deserve your attention