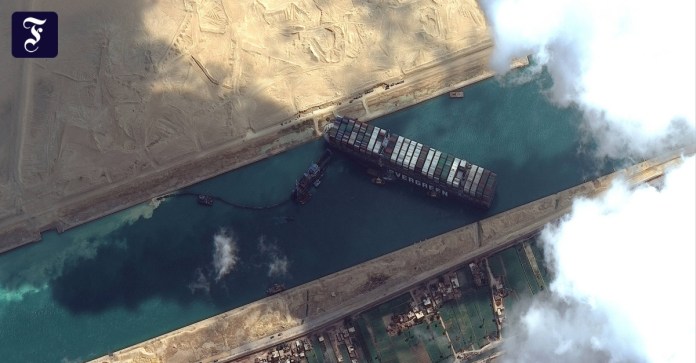 Dhe hoped to uncover the container ship “Ever Given”, which is blocking the Suez Canal, is progressing a little. The shipping and logistics company GAC spoke on Saturday of more than ten tugs and three dredgers that are in use to reopen one of the world’s most important waterways for trade. There is “slight movement”. The freighter is still aground.

Admiral Usama Rabi, chairman of the canal authority, announced on Friday evening that nine large tugs were involved in the work.

Shipping on the canal was stopped after the 400-meter-long container ship ran aground due to a sandstorm in poor visibility. This has caused a long traffic jam. According to information from the Danish shipping company Maersk, more than 200 ships are now stuck in both directions in the “traffic chaos”. The ship of the Taiwanese shipping company Evergreen sails under the Panamanian flag.

Several factors played a role in the maneuvers of the tugs to uncover, said Rabi, especially the wind direction and ebb and flow. It was a “complicated technical operation,” said Rabi. The United States and other countries offered aid to Egypt. According to CNN television, the American Navy wanted to send a team of experts to investigate the situation on Saturday.

Here’s how to get rid of your Christmas tree

Fight for the ski crown: weather plays Pinturault in the cards...

Juventus after disgrace in the criticism: “Pirlo, flop and mistake!”