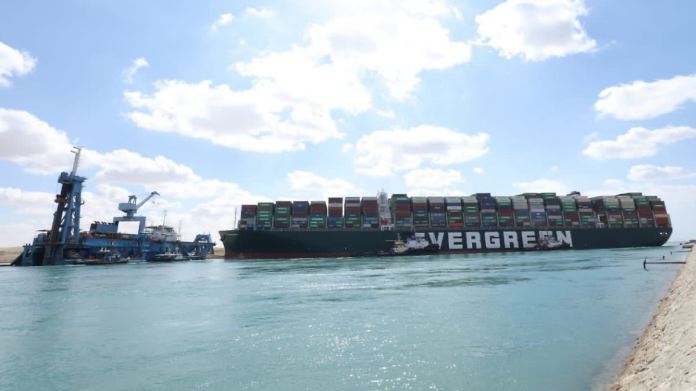 Slight movement when exposed
Egypt prepares “Ever Given” discharge

The “Ever Given” has been stuck in the Suez Canal for almost a week, bringing shipping to a standstill. The canal authority first tried to pump sand away from under the ship – with an initial small success. Now there is also a partial unloading of the giant container in the room.
After days of efforts to uncover the container ship in the Suez Canal, workers are preparing for a possible partial unloading of the “Ever Given”. Egypt’s President Abdel Fattah al-Sisi ordered appropriate preparations. That said Admiral Usama Rabi, chairman of the Canal Authority (SCA), the television channel Extra News.

At the same time, Rabi hopes that the “Ever Given” can be made afloat again by Sunday night. Thanks to the 27,000 cubic meters of sand already removed from under the bow and with the help of around a dozen tugs, the ship “moved 30 degrees to the left and right for the first time on Saturday,” he said on Egyptian television. The head of the Japanese ship owner Shoei Kisen, Yukito Higaki, was also optimistic. There are no problems with steering and propulsion, he said on Friday: “As soon as the ship moves again, it should be operational.”

The pressure on those responsible at the Suez Canal is increasing because there are now more than 300 ships waiting to pass through and the economic damage continues to grow. According to the service provider Inchcape Shipping Services, the ship could so far be moved 29 meters using tugs. Work to uncover the 400-meter-long ship that has been blocking the Suez Canal since Tuesday continued.

Two more smugglers, registered in the Netherlands and Italy, were expected to provide support on Sunday. This was announced by the company Bernhard Schulte Shipmanagement (BSM), which is responsible for the technical management of the “Ever Given”. The rudder of the container ship has therefore already been freed.

“Strong wind” identified as the cause

The ship of a Japanese owner, about the size of the Empire State Building in New York, was on its way to Rotterdam when it ran aground while crossing the canal with two pilots on board. According to initial investigations, the cause was “strong wind”, said BSM. Admiral Usama Rabi, chairman of the canal authority, ruled out on Saturday that the wind and the sandstorm alone would lead to the accident. “Human error” cannot be ruled out either.

The 25 crew members, all from India, are doing well and still on board. So far there is no information about possible damage to the cargo or pollution of the water. Every day the Suez Canal remains blocked, according to a report by the insurer Allianz, world trade costs between six and ten billion dollars. According to the canal authority SCA, Egypt loses between $ 12 million and $ 14 million per day of closure. In 2020, the Canal Authority earned around $ 5.6 billion from the transit of 18,800 ships.

Fabio Quartararo: “Yamaha has to work on weight” / MotoGP DAX slightly in the red – KKR is likely to sell...

Corona: This is how the first corona patient in Germany is...

Sarafina Wollny is pregnant for the first time: “Can’t believe it”