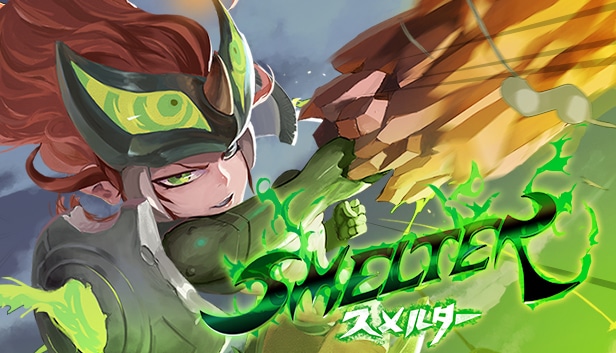 DANGEN Entertainment announced today that the action-platform-strategy hybrid SMELTER will be released on April 22, 2021 for Nintendo Switch, PS4, Xbox and PC. In conjunction with the release date announcement, a brand new trailer with full animation, new gameplay and the theme song by Manami Matsumae has been revealed. SMELTER is called “Actraiser meets Mega Man” and combines 2D shooter real-time strategy with explosive side-scrolling action stages. Pre-orders for SMELTER in the Nintendo Switch eShop will be possible from March 25th.

SMELTER is an action-strategy hybrid that combines real-time strategy with 2D platforming stages. Players take on the role of Eve, who embarks on a journey to find Adam and meets a mysterious being called “Smelter”. After a short persuasion, Eve merges with Smelter and gains incredible power. She agrees to help Smelter expand his empire to find Adam’s whereabouts together. The game unfolds in an alternation between strategy and action phases, interrupted by cinematic sequences, all of which are wrapped in a crazy story.

In overhead map sections in the style of Mode 7, players control the flying smelter, who can fly, shoot and destroy enemies and obstacles while giving orders to his troops to expand the territory, build structures and attack units against enemy monsters in various Unleash regions. The player controls Smelter in a top-down strategic conquest as he and his Zirm troops attempt to expand his empire by completing quests and facing an onslaught of enemies determined to stop him. The gameplay is designed with gun and command controlled interfaces and offers modern tutorials to help both veterans and newcomers to the genre.

Once the player has completed certain NPC controlled quests and pinned key locations on the map, they will gain access to new and exciting action platformer stages where they will navigate the Smelter-infused Eve on foot and take on the bad guys. Eve can perform a range of melee attacks, jumps, leaps, wall grabbers, smelter special attacks, and maneuvers to complete the stages and advance the story. The stages contain secret trial stages in which players are rewarded for completing short levels within specified conditions, such as: B. Time Trial, Don’t Get Hit, Don’t Be Seen and more.

One of the most important modern features of SMELTER is the elementary skill tree system, which gives Eve and Smelter special skills on land and in the air. Use Gurabi’s earth- and gravity-based abilities to perform punching combos and rock shield counters, launch shock-like vortex attacks with Eremagu’s electrifying abilities, and fire long-range gunfire attacks with the unstable but deadly elemental ability Nutoro. By unlocking new skills, players can reach new areas and approach stages with different approaches.

“While planning SMELTER we made it a point to put our own stamp on the genres of top-down strategy and action platformer, but we definitely took inspiration from classics like Actraiser and the Mega Man series, simply because that the games that many of us loved to play and still love to play. And while that may explain some of the inspirations behind the game design choices, we feel that ultimately SMELTER became a combination of the personalities of our team and what each of us loves to read, hear, play and see, ”says Brian Otten, one of the core developers at X PLUS.

SMELTER is the product of a very small and international team that works at X PLUS in Osaka, Japan. The absolutely rocking soundtrack comes from Evader and the main themes from Mega Man composer Manami Matsumae, who currently lives in Osaka. SMELTER has already been shown at BitSummit, the Tokyo Game Show and the popular Steam Game Festival and aroused great interest among players from all over the world.

Strong – Herrmann clears up and storms on the podium –...