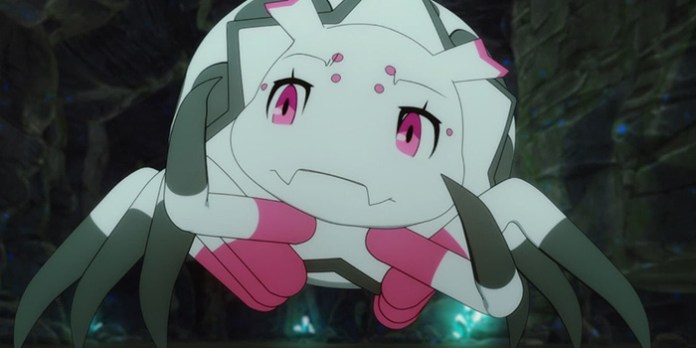 On the Twitter-Account of “So I’m a Spider, So What?” (Japanese: “Kumo Desu ga, Nani ka?”) announced today that the series will take a break on April 2, 2021. The second half of the Isekai anime, which begins with episode 13, will continue on April 9, 2021.

“So I’m a Spider, So What?” Is directed by Shin Itagaki (“Berserk”) at Millepensee. The script is written by writer Okina Baba and Yuuichirou Momose (“Infinite Dendrogram”), while Kii Tanaka (“Hundred”) is the character designer. Masahiko Suzuki, Ryo Hirata and Hiromi Kimura are responsible for the monster design.

The series kicked off on Japanese television on January 8, 2021. In this country, Crunchyroll shows them as »Crunchyroll Original« in the original sound with German subtitles in the simulcast. A German express dub has been released every Friday since February 19, 2021.

The original light novel was penned by Okina Baba, who has been publishing it at Kadokawa since May 2015. A manga adaptation started in December 2015 and appears in this country under the title “I am a spider, so what?” By Manga Cult.

>> To the anime series at Crunchyroll
>> Order the manga from Amazon

When an explosion kills an entire school class, the souls of the students are reborn in a mysterious fantasy world! But while some of them are given new lives as princes or magicians … not everyone is so lucky.

Two cases of an even more contagious corona mutation from South...

Covid-19 in children – “There are several reasons for increasing numbers...