Cedric Itten and the Glasgow Rangers are Scottish champions.

The long wait is over: The Glasgow Rangers are Scottish champions for the first time since 2011. The record champion headed by coach Steven Gerrard won his 55th title after nine years, nine months and 20 days prematurely because rival Celtic (51 championships) at Dundee United did not go past 0-0.

Big celebration for Cedric Itten and his teammates, big disillusionment for Albian Ajeti, who looks down the tube with the Bhoys. Itten, the Nati striker in Rangers’ service, has so far scored four goals and one assist in 22 Premiership games. The ex-Super League goalgetter under Gerrard made it into the starting eleven only three times.

He can also thank a fellow countryman that Itten is now in a celebratory mood. In the 0-0 win against Dundee United, Benjamin Siegrist hewed everything that the Celtic stars had in store for him. 27 shots, 12 of them on goal – and still the zero is there.

After 28 wins and four draws in 32 games of the season without a defeat, the Rangers can no longer be pushed out of the top of the table with six games left. With a 3-0 win over St. Mirren on Saturday, Itten’s team laid the foundation for ending the Celtic series after nine championships. With the tenth title in a row, the eternal opponent would have set a record.

For the Rangers, the championship is an exemption after the bankruptcy in 2012 and the fall into fourth division. In 2016 the club returned to the Scottish Premiership, Liverpool legend Gerrard joined in 2018. The 40-year-old celebrated his first title as a trainer on Saturday when he slid on his stomach as a “diver” across the beer-soaked cabin floor.

Despite the ban due to the pandemic, thousands of fans have gathered in front of the Ibrox Stadium and celebrated. The Scottish government reprimands the supporters, but the police closed both eyes. (sid / leo)

Corona easing: Garden centers should soon open all over Germany

The technology bargains of the Amazon Blitz deals from February 10,... 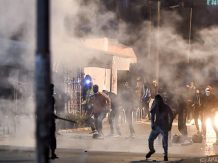 600 arrests after rioting in Tunisia – Politics –

20 degrees, but gloomy forecast for the weekend weather