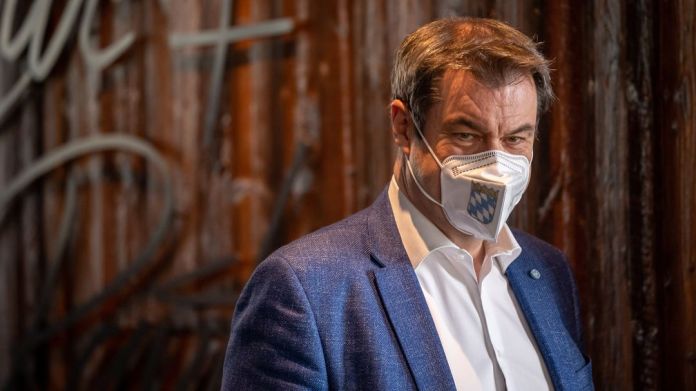 Munich / Augsburg. Bavaria’s Prime Minister Markus Söder (CSU) criticizes his colleagues’ corona policy. “The corona situation is coming to a head, unfortunately some countries have not yet understood the seriousness of the situation,” he told the “Augsburger Allgemeine”.

Regarding the recent debate about possible new talks between the federal and state governments on corona measures, he said: “We don’t need new talks all the time, but the consistent implementation of the emergency brake.”

Söder demanded that the emergency brake should automatically apply everywhere in Germany if the incidence was over 100. “The patchwork quilt in the fight against corona must be ended, this includes exit restrictions such as in Bavaria and Baden-Württemberg,” he emphasized. “It is now needed in all cities and districts in Germany with an incidence of over 100.”

Baden-Württemberg’s Prime Minister Winfried Kretschmann (Greens) had on Saturday for the beginning of the week further talks between the federal and state governments about a hard lockdown, but not necessarily on a large scale.

“We also have to discuss this with other countries in advance, with the Federal Chancellery. We see, the numbers are literally racing up, ”said Kretschmann on Saturday evening in Stuttgart. In the talks on Monday and Tuesday you have to “come to terms”.

Lockdown: car washes, hardware stores too? Which stores are open

Kruse: FC Bayern’s Salihamidzic wanted to report – “Of course he...

Horst Hrubesch: That’s how he wants to give HSV talents

Biden to celebrate in Corona times: Inauguration one size smaller