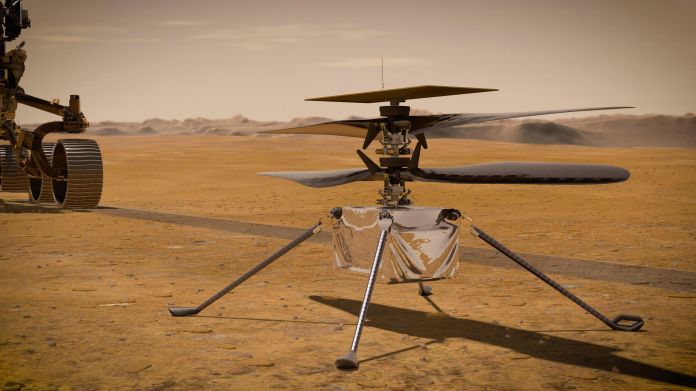 Washington – The small helicopter “Ingenuity”, which landed on board the rover “Perseverance” on Mars about a month ago, could set out on a test flight for the first time at the beginning of April. “Ingenuity” (in German: ingenuity) could start on April 8th at the earliest, announced the US space agency Nasa at a press conference on Tuesday. It would be the first flight of an aircraft over another planet.

The first flight of “Ingenuity” should take 30 seconds

“This first flight is something very special, it is by far the most important flight we will do,” said NASA engineer Håvard Grip. “The helicopter should take off and then climb to a height of about three meters, there it should fly on the spot for about thirty seconds, turn, and then come down again and land.”

The 1.8 kilogram mini helicopter had already sent a first status report to the control center in Pasadena, California, after the “Perseverance” rover landed on Mars, indicating that it is in good condition.

“Ingenuity” hovers, “Perseverance” stands. This is how NASA imagines the experiment.

The flight attempts should last a month

“Perseverance” is currently taking the helicopter to its flat, ten by ten meter area, selected by NASA scientists, near the landing site, where it then has to be set up for take-off. The “Ingenuity” powered by lithium-ion batteries could then start several flight attempts for around a month. The helicopter has to defy extreme conditions: On Mars it is cold down to minus 90 degrees Celsius at night, the gravitational pull of the planet is also lower and the atmosphere is much thinner.

The rover “Perseverance”, weighing around 1,000 kilograms and the size of a small car, was set up in a risky maneuver in a dry lake called Jezero Crater at the end of February – after 203 days of flight and 472 million kilometers. “Perseverance” is to investigate this lake with a diameter of around 45 kilometers over the next two years.

The development and construction of the approximately 2.5 billion dollar (about 2.2 billion euros) rover had taken eight years. He will search for traces of previous microbial life on Mars and research the climate and geology of the planet.

Bitcoin and Elon Musk: Bitcoin is growing out of its infancy

Another attack on a Polish supermarket

“The dream ship – Cape Town”: Max Parger against “the shampoo...