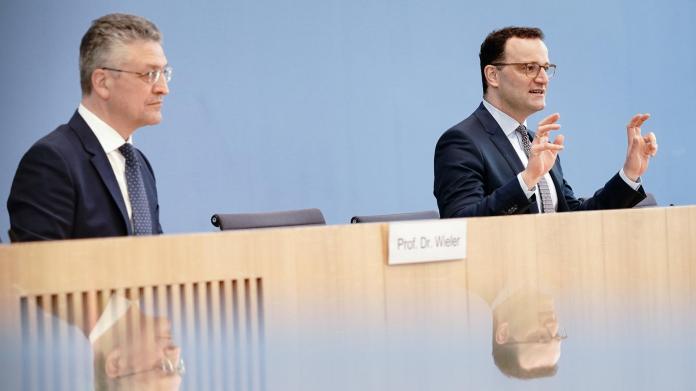 Federal Minister of Health Jens Spahn (CDU) warned at the press conference of the Robert Koch Institute (RKI) in Berlin that the number of corona infections would continue to rise against an imminent overload of the German health system. “At the moment the numbers are rising too quickly and the virus variants make the situation particularly dangerous,” he said on Friday in Berlin. “If this continues unchecked, we run the risk that our health system will reach its limits in the course of April.”

The President of the Robert Koch Institute, Lothar Wieler, also painted a gloomy picture. There are “clear signals” that the third corona wave that has now started “can become even worse than the first two waves,” he said at the joint press conference with Spahn. The country must be prepared for the fact that the number of infected people will rise sharply, that clinics will be overloaded and “many people will also die”.

Working people, but also children and young people, are particularly affected by mutant B.1.1.7. Infection occurs mainly in private households, but also in daycare centers, schools and at work.

For the Easter season, Wieler only recommended meetings with close family members – and otherwise best outside with a mask. “If possible, please do not travel, either domestically or abroad.” So far, prudence has prevented a much worse situation.

“We are only at the beginning of this development. And if we do not take countermeasures immediately, the consequences will be serious. Science is unanimous on that,” said Wieler. The RKI President believes a drastic increase in new infections is possible. “Sure, that could be 100,000 a day,” he said.

Federal Health Minister Spahn called on the population to reduce contacts and comply with the rules for containing pandemics. He appealed to the federal states to “consistently implement” the agreed emergency brake to withdraw openings.

Citizens should also “ideally only meet outside”. Both Spahn and Wieler also asked to use the opportunity to vaccinate.

Ten percent of Germans vaccinated at least once

A little more than 10 percent of people in Germany have received at least the first dose of the corona vaccination. In total, more than 12 million doses were administered, said Federal Health Minister Jens Spahn (CDU). 4.4 percent of people have already received the second dose, according to figures from the Robert Koch Institute from Friday morning.

In April, 15 million vaccine doses are expected, said Spahn. That is more than was inoculated in the whole of the first quarter. Everyone from the 2nd priority group – including people over 70 years of age, people with previous illnesses and certain occupational groups – should now be included in the vaccination campaign.

Federal Minister of Health Jens Spahn also called for more flexibility in vaccination. So it is possible that over 70-year-olds would be given non-vaccinated doses on the weekends. “That gives the vaccination regulation easily,” says Spahn in Berlin. This can be handled flexibly on site.

At the same time, Spahn says that a seventh can of an ampoule from BioNTech / Pfizer is basically possible, but difficult.

Corona test compulsory for travelers only from Tuesday morning

The general corona test obligation for entry by plane to Germany should now only come into force in the night from Monday to Tuesday. The start date will be postponed again a little to give more time for preparation, said Federal Health Minister Jens Spahn (CDU) on Friday in Berlin.

Initially, it was planned that the new, stricter requirements would come into force on Sunday night. Spahn described the consequences of the new regulation as follows: “Those who do not have a negative test will not be taken along.”

The new regulation applies regardless of the corona situation in the country from which someone flies to Germany. The test may be taken no earlier than 48 hours before entry. The travelers should bear the costs themselves. The airlines are only allowed to let the passengers on board if they submit a negative test – otherwise they face a fine.

Anyone who is positive must be quarantined in the country of travel in accordance with the regulations applicable there. He or she usually has to bear the costs for this himself.

Guest goalie Siebenhandl outstanding in the final phase – no winner...

YouTuber builds the most expensive Xbox controllers out of pure gold

CEO Promises “Most Realistic Simulation Ever Made”

Crowds of tourists in the Harz Mountains: politicians want to advise...