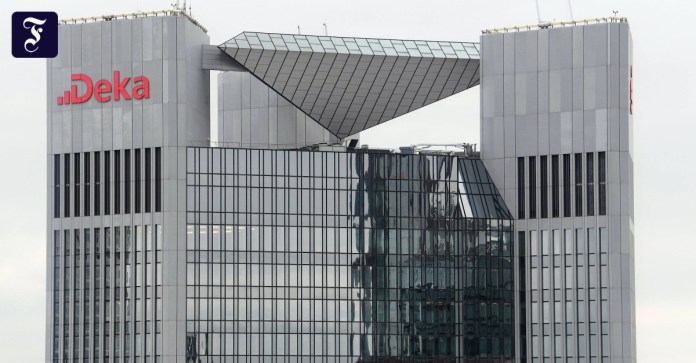 Dhe savings bank fund company sold more funds and certificates in 2020 than ever before. However, the balance sheet, which the Deka Management Board reported on Tuesday, has some flaws: The majority of the extremely strong increase in net sales from 80 percent to 32 (2019: 18) billion euros is due to the purchase by large investors such as pension funds and foundations ( “Institutional”), on which Deka earns less fees than with mutual funds for private investors. For private investors, there was hardly anything left in terms of the positive year-on-year performance of their funds. In addition, Deka had to increase its risk provisioning a factor of eight, especially for aircraft it financed. The economic result – the fund company’s key profit figure – fell by 38 percent to 269 million euros. For comparison: main competitor Union Investment, the fund company of the Volks und Raiffeisenbanken, has developed differently. Union’s new business shrank last year by a good fifth to 15.1 billion euros, but this fund company earned before taxes with 649 million euros, significantly more than Deka.

Nonetheless, the Deka owners, the savings banks, can be pleased: Deka wants to make up for the dividend payments that have been prohibited by the European banking supervision of the ECB since spring 2020 and will distribute a total of 233 million euros of profit in two tranches in 2021.

Deka CEO Georg Stocker justified this high distribution, the majority of which will only be paid after the “ECB dividend block” has expired in October, with Deka’s solid capital base, which is reflected in an unchanged core capital ratio of 14.2 percent. In addition, 2021 should become a normal year again, if the corona pandemic allows. Stocker dared – with reference to these uncertainties caused by the pandemic – at least the prognosis of achieving 400 million euros in economic results in the current year. That would be roughly the average for the past five years.

However, Deka is suffering from a decline in earnings. Despite the record net sales, fee income, which accounts for 94 percent of total revenues, shrank by 16 million euros to 1309 million euros. The board of directors justified this primarily with the lower prices on the securities markets in spring 2020. As a result, the value of total client assets under management fell from EUR 313 billion at the beginning of the year to EUR 285 billion at the end of March. The inventory fees are attributable to the average client assets under management. Deka also distributed a good 3 billion to investors (interest and dividends) and paid back certificates that were due. Insofar, after deducting the record net sales of 32 billion euros that occurred in the course of the year and managed customer assets that rose again to 339 billion euros at the end of the year, the invested Deka investors saw a gain in the value of their fund shares, said the deputy chairman of the board Matthias Danne and said when asked an average return of 0.6 percent plus distributions.

Cherokee request removal of their name from Jeep SUVs

Germany climbs to second place, but falls behind in the technology...

Corona news in the ticker: Incidence of 35 could not be...

No easing over Christmas – partial lockdown in Berlin will be...

Now she’s messing with the Queen