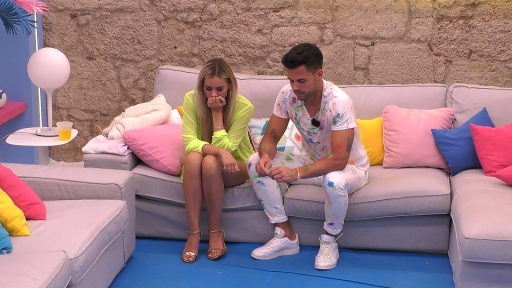 From the first minute they were THE dream couple on “Love Island”. Now, three weeks later, everything is different. Dennis and Nicole are history. But more dramas are taking place in the villa. Julia makes Amadu a violent jealousy scene. But it gets even worse! So blatant that Jana Ina Zarrella has to go to the villa on a special assignment. “Of course I am there immediately when I am needed,” said the moderator. “The events in the villa have rolled over. The Islanders just had to be reminded again what ‘Love Island’ is about. That was the most emotional and surprising semifinal so far for me too!” Every islander has to commit to his couple. If you can’t imagine a relationship with your partner after “Love Island”, you have to go. And so not all couples wake up on the last morning on the island of love.

“I don’t think I can go on like this. I won’t be able to give you what you ask for. I’m sorry”, with these words Nicole finally ended the couple with Dennis that evening. how could it get so far? The former dream couple has been discussing and clashing all day long. A lack of feelings and too little communication are the constant allegations. Then Nicole draws the line. Dennis is shocked and gets loud: “The first two weeks here were one of the best in my life. And because of a few things and inconsistencies you end the whole thing. Crazy, I totally misjudged you. You sort out that quickly? It hurts, it really hurts. “

What was going on with Bianca? Julia confronts Amadu

Julia has never made a secret of the fact that she is very jealous. In the evening, star DJ Hugel surprises the islanders and hangs up in the villa’s garden. It is celebrated and danced. Did Bianca dance to Amadu there? And why is Amadu making a funny pick-up line for Bianca? Julia thinks she can feel that her couple is moving away from her. “Please don’t make an elephant out of a mosquito”, Amadu reacts annoyed when Julia asks him about it. He has nothing to reproach himself with: “You have to ask yourself whether something is wrong with your perception!”

This has never happened before with “Love Island”! Jana Ina Zarrella surprises the islanders in the villa and announces that it is now a matter of determining the couples for the grand finale on Monday evening. “Now is the end of tactics,” said the moderator. The islanders have to acknowledge their couple partner. Independently of each other, the girls and boys are asked whether they are passionate about their couple and whether they can imagine a relationship based on “Love Island”. After all the arguments and emotional chaos, that seems to be the biggest challenge for some couples. Although Dennis and Nicole have split up, the man from Düsseldorf wants to give the relationship a chance. But what about Nicole? And does Amadu and Julia’s relationship stand a chance?

The first German “Love Island” spring season is coming to an end. Tomorrow evening the three-week love journey will be over and the winning couple will be chosen. Don’t worry – if you can’t get enough of “Love Island”, you can be happy. From Monday, March 29, the third season “Love Island” UK (2017) can be seen exclusively on TVNOW. The episodes are available in the original with German subtitles. But beware of the risk of addiction – the first five episodes will go online on Monday and can be streamed free of charge for seven days. Then the adventure of the singles full of exciting encounters and tingling flirts can be followed in the premium area. Five new episodes appear here every week.

After the broadcast, the episodes are available free of charge on TVNOW for seven days – afterwards in the PREMIUM area.

RTLTWO heralds in spring with “Love Island – hot flirts and true love”. A group of adventurous singles is experiencing a legendary spring full of exciting encounters and tingling flirts in a luxurious villa. Who will find their dream date or even true love and secure the chance of 50,000 euros? Last but not least, the audience has a say, because they can significantly influence what is happening via the interactive Love Island app. Presenter Jana Ina Zarrella leads through the dating show. The program is produced by ITV Studios Germany. The show is based on a proprietary format from ITV Studios and Motion Content Group and is distributed by ITV Studios.

Swearing in of Joe Biden: supporters of Donald Trump want to...

Player Association: Compulsory vaccination is the way out of the crisis

US pilot legend has died at the age of 97

Truck drivers rest on the motorway: A2 becomes “the largest parking...

WAC and the anticipation of the final against Feyenoord