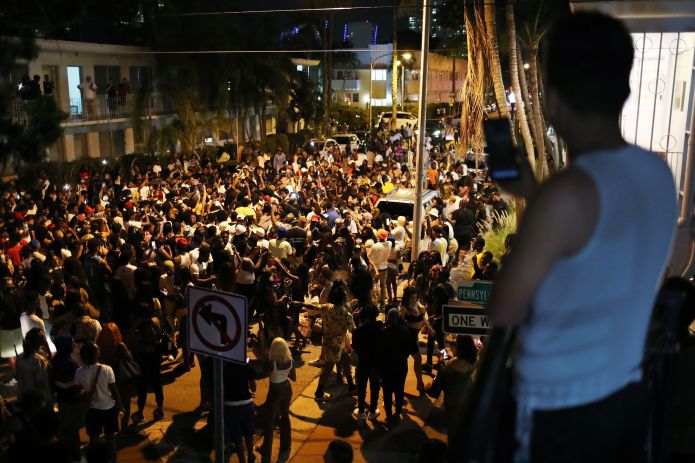 Miami Beach has been flooded by revelers for days. There are street battles and arrests. Now the state of emergency has been extended.

Parties that lead to street battles and arrests, curfews and corona regulations that the police are trying to enforce with pepper spray bullets, a mayor pleading on TV: “It’s more than we can bear … please, don’t come to Miami Beach”.

Even more than in previous years, celebrating spring break visitors flood the popular party location in Florida amid the corona pandemic. There is a curfew in the city’s most important party districts from 8 p.m., but videos show that only a few are impressed: Videos and photos show singing and dancing crowds, masks are few to see despite the public mask requirement in Miami Beach.

There are regular street battles again and again if the police want to enforce protective measures. There have been over 1,000 arrests since the beginning of the semester break in early February. Around 80 firearms were seized. “Public safety is at risk,” said Democratic Mayor Dan Gelber. “It feels like our city is a powder keg right now.”

In order to get a better grip on the situation, three main bridges to the mainland were closed – theoretically only residents, commuters and hotel guests are allowed to pass. In addition, the authorities in Miami Beach have extended the current state of emergency. A curfew will continue to apply in areas like the famous Ocean Drive party mile in South Beach until at least March 30th, from 8 p.m. to 6 a.m. If necessary, the state of emergency could be extended until the end of the semester break on April 12, it said.

Florida Governor Ron DeSantis does not worry about the consequences of the huge party in times of rising corona cases in the country. The Republican prides itself on the fact that there is no mask requirement in his state and that there are no visitor limits in shops, restaurants, bars and clubs.

“Look at booming South Florida. Los Angeles is not booming, New York City is not booming,” he said in February. It was this type of advertising that, in addition to the party lust caused by the pandemic, contributed to the fact that even more revelers came to Miami Beach this year than in previous years, one speculates in Miami Beach.

But not only Miami Beach and Florida are feeling the effects of the spring break: Sunday saw as many travelers nationwide as it had not in a year; Over 1.5 million people passed the airport security checks. This is attributed, for example, to the growing number of people vaccinated against corona and an increased volume of travel due to the “spring break”.

“We have to prevent another unnecessary wave – what we are seeing in Europe right now,” warns the White House. The head of the US health authority CDC, Rochelle Walensky, is also alarmed: Despite the high vaccination rate, it is still too early to travel. She worries that the number of infections will start to rise again.

The number of new corona infections in the USA has been falling for a long time, which is also due to the high rate of vaccination. Currently, 2.5 million vaccine doses are administered daily.

Joe Biden’s administration wants every willing American to be vaccinated by May 1, a schedule that the 78-year-old, whom his critics referred to as “sleepy Joe,” and his team should stick to. At least they kept their promise from the election campaign: In the first hundred days of Biden’s term in office, a hundred million corona vaccinations should be made possible. The goal was already achieved last week, on the 58th day.

Corona pandemic: Why the vaccination start is jerky in Germany –...

What does this mean for travel?