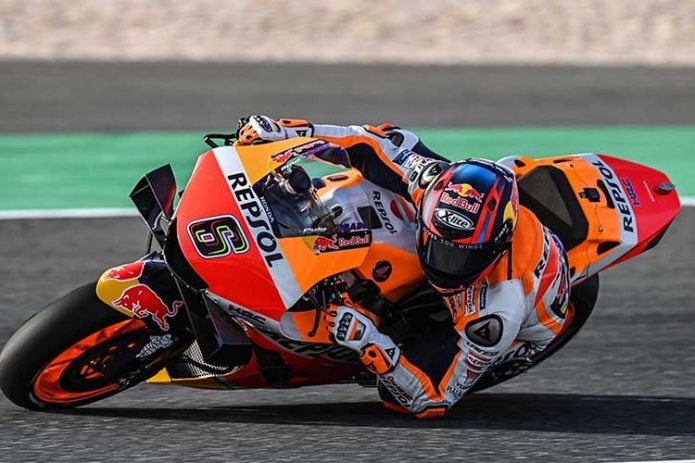 Stefan Bradl lost only 0.5 seconds to Morbidelli as ninth in FP3 in Qatar. But as a total of 18. he must now try in Q1 to conquer one of the two remaining places for Q2.

Stefan Bradl got stuck in 18th place in the first two MotoGP practice sessions on the Losail International Circuit on Friday, he drove 0.424 seconds slower than in the tests and was defeated by three rookies. The Marc-Márquez substitute from the Repsol Honda team is convinced that he will be among the front runners in the race pace on Sunday over 22 laps – thanks to his consistent lap times.

«I’ve studied the times carefully. Most of the opponents achieved similar lap times as in the tests two weeks ago, ”said the Bavarian, who has already booked 53 top ten places in the premier class. No German motorcycle racer has ever achieved this. “On Friday I was the only one of the four Honda drivers who couldn’t repeat my test lap time. Maybe we weren’t lucky with the set-up on Friday. But we knew that we could go faster if the set-up was right. “

At Honda, individual pilots use the new ride height adjuster. Bradl has so far refrained from doing so. “We were too busy with other things.”

On Sunday the wind should blow at 45 km / h from the northwest, gusts of up to 65 km / h can be expected. If the predictions are correct, there will be a sandstorm and it may not be possible to drive – like the MotoGP test on March 12th.

“The Losail Circuit is not the best track for the Honda, and when a strong wind blows, we are at greater risk than usual at the front,” says Bradl. “It will also depend on the direction of the wind. We have a 1068 meter long start-finish straight. A mistake can quickly occur there when braking at the end before turn 1. You have to drive very precisely on this flowing track; you have to stay very closely on the line. That’s why Yamaha is very strong here and that’s why the Ducati riders shake out such good lap times. We will see. Yes, the external conditions should change a little on Sunday. So far the wind has not been a problem, on Friday you didn’t have to say a word about it. “

Stefan Bradl managed the ninth fastest time in FP3, he was only 0.5 seconds behind Morbidelli’s best time. But he has to be 18 overall. of the first three trainings in Q1 try to get one of the two remaining places for the decisive Q2.

Could Pol Espargaró, the newcomer to Repsol-Honda, come up with new ideas? «I spoke to Pol after the test and here again on Thursday. He adapts very quickly, he was the best Honda rider on Friday. He had two crashes, but he wasn’t injured. He has to find the limit of the bike, so he has to push the limits. There is no other way. And as I said, things can get a bit critical on this track, especially with the Honda at the front. A crash can happen quickly. Pol has a driving style that goes well with the Honda. And he’s well on his way to finding the limit. ”

Mourinho wants RB Leipzig’s Sabitzer! Tottenham would pay that much...

David Hasselhoff: “There is only one Knight Rider”

Mick Schumacher will drive in Formula 1 for the Haas racing...