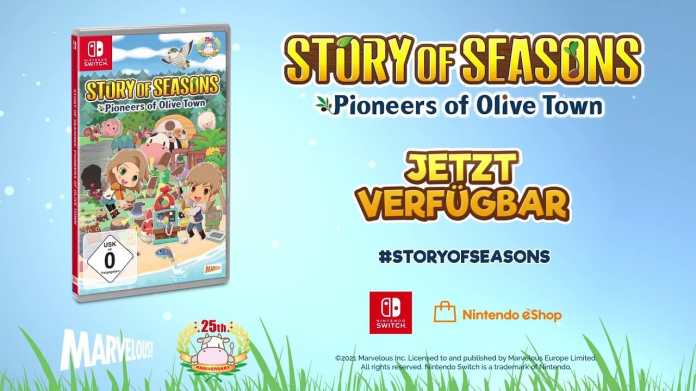 From now on you can pack your things and head to Olivingen! With STORY OF SEASONS: Pioneers of Olive Town, the latest offshoot of the series is now available for the Nintendo Switch. Developer Marvelous is celebrating the release with a new trailer that shows how different each “Story of Seasons” can be for the players.

In the video (see above) we accompany three different farmers on their arrival at their grandfather’s farm on the outskirts of the small town of Olivingen.

We have already tested the new STORY OS SEASONS:

25th anniversary of the series

The release of STORY OF SEASONS: Pioneers of Olive Town marks the 25th anniversary of the Bokujo Monogatari series in Japan, which was originally known in the West as Harvest Moon. The latest in the series takes a refreshing look at the genre of farm and life simulations, while staying true to the original gaming experience that players have taken dearly for two decades. You can find out exactly where the difference between STORY OF SEASONS and Harvest Moon is here: Where is the difference?

In STORY OF SEASONS: Pioneers of Olive Town, players experience a world full of exploration, romance and, of course, their own farm, as they restore grandfather’s fields to their former glory. But not only life in the field is part of the rural experience, also taming the wild nature, discovering new animals and furnishing the new home with completely new customization options are on the varied agenda of the players.

The game is also available digitally from the Nintendo eShop: as a standard digital edition for 49.99 euros and as a digital bundle called STORY OF SEASONS: Pioneers of Olive Town + expansion pass for 69.99 euros. The expansion pass offers additional outfits, events and marriage candidates.

The expansion pass can also be purchased separately for 19.99 euros from the Nintendo eShop, with a 15 percent discount within the first three weeks after publication. Owners of the expansion pass – whether purchased as part of the bundle or separately – also get instant access to three costumes that were inspired by outfits from previous STORY OF SEASONS games.

The fox costume, which was previously available as a pre-order bonus for the digital version, can now also be purchased for 1.99 euros in the Nintendo eShop. The fox costume is not included in the expansion pass.

For the release of the new STORY OF SEASONS part, developer Marvelous started a great animal welfare campaign with a competition to save a rare species of hoverfly. Gaming-Grounds.de is also taking part in the competition and has already been busy planting.

STORY OF SEASONS in real life: We plant vegetables

Ingo Hofmann: “The largest generation of heirs to date thinks …

Qualcomm is working on an Android-based switch clone

Snow expected on New Years Day in Berlin and Brandenburg –...

Corona virus in Stuttgart: The air is running out for the...