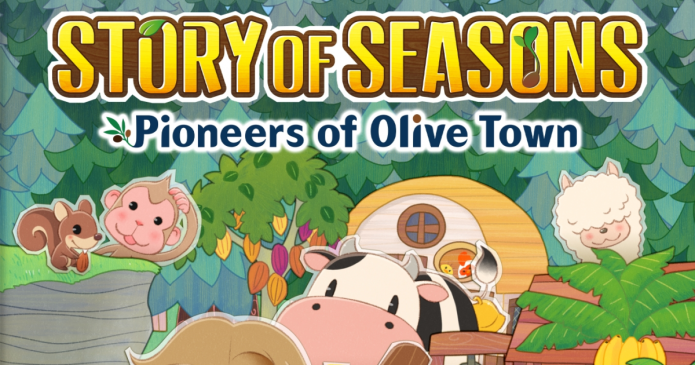 Raider is now called Twix and Harvest Moon has been called Story of Seasons since 2014 due to licensing agreements. A change in distribution doesn’t always come without complications. Anyone who knows the series has so far only had to get used to a different name. The rest of the farm simulation pretty much stays the same, even if Story of Seasons: Pioneers of Olive Town slams down a lot in terms of scope.

Yes, there is fun hidden in the concept if you have a weakness for organization and material management. There is also a little dating simulation in there. Story of Seasons simulates the flight from one reality to the other, and so you experience the dream that has become a game of liberation from the shackles of modern civilization. Get on your moped, get out of town, work a field. Pure country romance.

At least that’s what the intro sequence suggests, in which the main character does exactly that: She moves to Olive Town (in English Olivingen) to escape the stress of the city and instead settle in the grandfather’s inherited farm. Whether a man or a woman is up to you, as well as your voice, hairstyle and other personal characteristics that suit everything and everyone according to the zeitgeist. Whether a man with a peep organ or a woman with a boy’s hairstyle, there are no limits.

The old farm is now a completely overgrown, run-down area. So there is a lot to do. For example, cutting down trees to make space for a field. Plant a few flowers here, let some fruit grow there, tame a chicken over here and toddle it in a stable. Water, cherish, care. It takes a lot of strength, the drudgery, which constantly steals one unit after the other from the hearts of stamina at the top of the screen. If your Manneken does not find your tent in time (which, in Tardis fashion, is three times larger on the inside than on the outside), he or she will even fall over on the spot. Not a good idea because the next day you’ll still be groggy. The most relaxing thing to do is slumber in the bed at home.

What a waste of time this sleep! It would be better to have something to eat in between. Fortunately, the dozing town of Olivingen is right next door, so that you can fill your stomach in a café or restaurant and foster your muscles. You may even find love while munching, who makes court of you with small gifts. Here, too, gender does not matter. You can date boys and girls, regardless of the gender of your avatar.

A full program every day

Connoisseurs of the series yawn at this description. Everything has long been known, even if enriched with small zeitgeist variations. Story of Seasons: Pioneers of Olive Town is not trying to reinvent the wheel. It is only refined when possible. With the exception of the graphic, which still looks a bit generic, unless you disregard the residents of the village. The latter maintain a cute anime style that gives them a lot of character and is wonderfully beneficial to the basic village kitsch theme. Everything else comes from the asset kit, however. There is only one version of every tree, just like every bush, every cow and every chicken.

But there is also a reason for this, because the multiple use of an already existing model from the main memory costs the hardware less performance than the representation of individual objects. In the long term, this is a wise decision, as Nintendo’s switch will eventually drop in frame rate even with this measure.

Your farm is sprawling, even if it is divided into smaller segments that you have to unlock first. The first piece of land is just a training session to get to know. Here you cut the first trees, smash stones for ore, learn how to extract clay from rain puddles, and build the first processing machines that turn all of this stuff into solid building materials. For example, lumber, which is particularly important because you can use it to repair bridges. The latter give you access to a new stretch of land on the other side of the dividing brook, with new crumbling huts and barns, better (albeit more difficult to break down) material and new animals that you can tame and move into your stables.

This is the starting signal for an eternal cycle of resources that can only be maintained with hard work. Chop, tap, weed, scoop, every day anew. Eventually it works faster because you purchase upgrades for your tools and collect experience points that increase your skills. Manual work still fills most of the day, every virtual day.

Is that supposed to be relaxing? Better than city life? One might argue about it. But there is also something around. Grown vegetables, for example, that you can sell in the mail, as well as animal products from your cattle. Alternatively, you can cook it yourself as soon as you have exchanged the tent at home for a real house. Of course, this also requires resources – or, alternatively, just money, because you can also pay a craftsman for repair work. In any case, there is plenty to do.

One hand washes the other

As usual with Story of Seasons, the basic gameplay knows no limits. In theory, you can till fields and herd cattle until Santa’s never-little-day. In order to give typical I-play-through-gamers a silver lining on the horizon, there are also finite goals available. These mainly revolve around the expansion of olivingen or increasing the attractiveness of the city so that more tourists can spend time and money there. Your courtyard is one of the future attractions, but it is only part of the plan that the mayor has devised. More beautiful sidewalks, luxurious wellness options and other typical tourist facilities are to be financed.

Fortunately, you don’t have to manage it all by yourself. Getting tangible contributions in the form of materials is half the battle, what the residents of Olivingen reward you with thanks and friendly gestures. Sometimes they invite you to seasonal celebrations, where you can relax or do small bonus tasks that are primarily useful for a change from everyday life.

Secure the PlayStation 5 in the combo deal