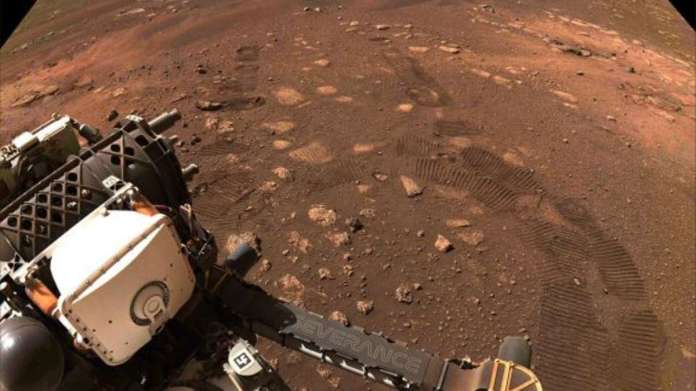 The NASA rover Perserverance is supposed to search for signs of life on Mars and will find it shortly after landing. In addition to breathtaking images, the research vehicle also sent sounds from the red planet to earth for the first time.

Washington, D.C. – The thought of the possibility of life on Mars has always inspired people’s imagination. The permanent settlement of humans on Mars through terraforming – i.e. the transformation of other planets into habitable, earth-like celestial bodies – is a vision currently being pursued by the American space company SpaceX * (Merkur.de * reported) owned by Tesla founder and multibillionaire Elon Musk.

But the well-known US federal agency for space travel and flight science, NASA, is interested in Mars and shot the rover “Perseverance” into space to explore it, which landed on February 18, 2021 on the Red Planet. Since then, the remote-controlled land vehicle has been searching for life in the planet’s past.

In addition to new photos of the surface of Mars, a crater landscape covered in iron oxide dust, Perseverance also provided sound recordings of the fourth planet in the solar system for the first time thanks to two built-in microphones – and without any noise from the rover itself. This is the first time the researchers have received one Impression of what the atmosphere sounds like on the planet around 230 million kilometers away. Now there are 16 minutes of Mars sound, which scientists are analyzing.

Noise on Mars puzzles researchers: “Like a high scratch”

“If I heard these noises while driving my car, I would stop and call a tow truck,” said Dave Gruel of NASA’s Jet Propulsion Laboratory (JPL) in California in a statement at a conference, newscientist.com reported. “But if you take a minute to think about what you’re listening to and where it was recorded, it makes perfect sense.”

At least in large parts of the recording. Because a noise that the researchers describe as a kind of high scratching, similar to running your fingernails over a school blackboard, is still puzzling them at the moment. NASA engineers are now trying to decipher what’s behind it.

The Mars probe Perseverance also laser scanned some of the rocks near its landing site to determine their chemical composition. They resemble basaltic rocks on Earth, and some of them appear to have water trapped in their molecular structure as well.

And water is known to be the origin of all (human) life. The possibilities for colonizing Mars * through Perserverance’s discoveries can, however, be assessed from 2026 at the earliest. Only then should the rover and the collected Martian rock samples be navigated back to Earth. *Merkur.de is an offer from IPPEN.MEDIA

Violent protests in Madrid and Barcelona

Dax climbs to new record high – Why is the next...

Frankfurt am Main: Danger from object on A 661 between Frankfurt...