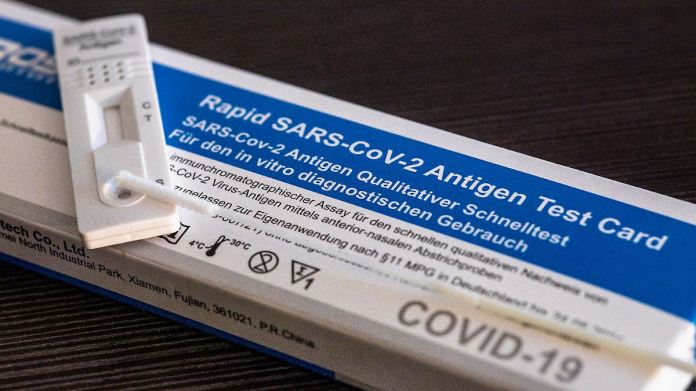 A meta-study shows that rapid antigen tests relatively often fail to detect Covid-19 infections, especially when people show no symptoms. But can you really conclude that the tests are too unreliable? And what applies to rapid tests approved in Germany?
The number of cases is rising, the third wave is rolling and politicians are running out of tools to contain the spread of the coronavirus. Much more than bans on going out and school closings is no longer available, i.e. measures that further restrict the freedom of the population. Rapid antigen tests are an important alternative to bridging the time until a large part of the population is vaccinated. Their use can, for example, prevent schools or daycare centers from having to be closed.

But now reports of an updated meta-study by the Cochrane network are unsettling the population. It comes to the conclusion that rapid tests are very unreliable in detecting infections compared to PCR tests. This finding is not new, however, and it does not in the least reduce the usefulness of the antigen tests. On the contrary: the meta-study even confirms that they can do exactly what they are intended to do.

Evidence of infectivity, not infection

The basic misunderstanding is that rapid antigen tests are there to find infected people. But this is only a welcome bycatch, so to speak, because primarily they are supposed to break the chains of infection by recognizing whether someone is currently contagious.

Antigen tests detect protein fragments of Sars-CoV-2, while PCR tests target the genome of the virus. This means, among other things, that the rapid tests only show a positive result if the viral load is high. This in turn means that they do not react shortly after an infection, so a person who tested negative can be contagious a few hours later.

In contrast, PCR tests react to very small traces of virus RNA. That is why they not only recognize an infection relatively soon after transmission, but also weeks later, when an infected person has long ceased to be contagious.

So it is hardly surprising that the meta-study, which summarizes the results of various studies, comes to the conclusion that rapid antigen tests detect infections fairly reliably in people with symptoms and “work less well” in people with no symptoms.

But because the point and purpose of antigen tests is not to find all infected people, but mainly those who are contagious, it turns into a shoe. “That means that PCR tests have a low specificity for identifying infectious people among asymptomatic people,” says Irene Petersen, professor of epidemiology and health informatics at University College London (UCL).

“If more than half of the people have no live virus in their body, a validation study using the PCR test as the reference standard can never achieve an apparent relative sensitivity of the rapid tests of more than 50 percent,” she explains.

A headline like “Rapid tests only find half of those infected” is then quickly created, which is then interpreted in such a way that the 50 percent that slipped through could infect their classmates, teachers, colleagues, residents, restaurant or theater-goers. And that’s why rapid tests are not safe enough.

One has to “recalibrate” the results of such work, says Petersen. For example, a Liverpool pilot study, in which rapid antigen tests found less than 50 percent of those infected without symptoms, suggests “that the actual sensitivity is probably over 80 percent and probably higher.”

It would be better to design studies on the reliability of rapid tests in a fundamentally different way. You have to “evaluate monitoring and clinical diagnostic tests with different metrics, instead of comparing all test modalities with the ‘gold standard’ PCR test,” says Jeremy Rossman.

When are you infectious?

If you do make a comparison, you should look at the results that are relevant for rapid tests, namely how reliably they show a positive result with a viral load that is considered to be infectious. Determining this threshold value is, however, not that easy, so far it can only be determined roughly, which is due, among other things, to the different methods of the evaluating laboratories.

The viral load is determined via PCR as a so-called Ct value (cycle threshold value). It corresponds to the number of PCR cycles that are necessary until the virus genome (RNA) is positively signaled. This means that the lower the amount of virus, the higher the Ct value.

The threshold value is somewhere below 30. This is also the value that the RKI used to give as a guide for doctors, at which “according to previous experience” patients can be released from isolation. In the meantime, the RKI has named a virus amount due to the different procedures. As a result, the MVZ Labor Ravensburg gives Ct values ​​between 23 and 27 for its various PCR systems.

Relevant results of the antigen tests are very good

There are, however, great differences in quality among the many rapid antigen tests offered worldwide. That is why the WHO specifies guideline values ​​that also in Germany correspond to the minimum criteria set by the Paul Ehrlich Institute (PEI) in coordination with the Robert Koch Institute (RKI).

This means that the rapid tests of at least 100 people with Covid-19 symptoms can detect more than 80 infections within seven days of the onset of symptoms (sensitivity). In addition, it must be ensured that they almost never produce false positives. This means that their specificity must be greater than 97 percent.

If you want to be on the safe side, take a look at a regularly updated list from the Paul Ehrlich Institute (PEI). It contains rapid antigen tests for professional use, the sensitivity of which has been checked using a standardized procedure.

The Federal Institute for Drugs and Medical Devices (BfArM) lists approved self-tests that meet the minimum criteria. Quite a few of them can also be found among the tests for professional use, as they are often identical products to which a package insert for laypersons has only been added.

6,729 new infections with the coronavirus reported

Shock for Ronaldo – that’s why he is not allowed to...

The facial tissue market is booming worldwide with Kimberly-Clark, Procter &...