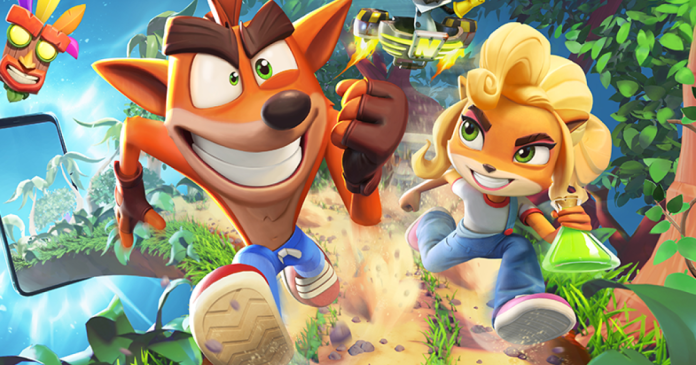 With On the Run, Crash Bandicoot returns to the smartphone. The entertaining runner convinces in many ways.
First released in 1996, Crash Bandicoot is celebrating its 25th birthday this year. Along with countless other characters, Crash appeared in more than 20 different games that served countless genres over the years. In addition to the classic platformer that initiated the success of Crash Bandicoot, various party games and the extremely popular Kart Racer have appeared over the years. There has already been a crash for mobile devices, too, but without being able to arouse great enthusiasm.

With On the Run, the game manufacturer King, best known for the hit Candy Crush, wants to celebrate the anniversary of Crash Bandicoot in a fitting way. With the Runner, a relatively popular genre has been chosen that offers little new content, but is a lot of fun. We took a closer look at the anniversary game.

While many runners on the market like to claim to tell a story, it is only in the rarest of cases that a properly thought-out story can be found. In contrast, King uses the story to give the game some meaning and at the same time bring into play the countless characters who have appeared in the Crash universe over the past 25 years. In On the Run, Dr. Neo Cortex takes on the role of the villain who wants to take control of all dimensions.

His retinue consists of innumerable opponents and final bosses from earlier parts. Among other things, Scorporilla, Mr. Crumb or Nitrous Oxide are represented, who we encounter at different points in the game and try to stop our run. Even characters like Pink Elephant, who was originally scheduled for an earlier game, get an appearance.

On the side of the good guys, besides Crash, we also work with Coco Bandicoot. Among other things, she supports us in assembling weapons, which she can craft at the base. Those weapons play an important role, as we need them to be able to successfully take action against the countless hand camps and the respective bosses.

In order to be able to build these weapons, we have to collect a wide variety of objects from the many different islands and bring them back to the warehouse. Each weapon is built according to its own recipe, which gives us the ingredients we need. While collecting the parts is basically doable, the blueprints for the weapons become incredibly difficult over time. So difficult that you lose the desire to collect.

Thanks to the countless additional challenges, there are at least several options for collecting the items. It is mainly controlled via swiping gestures. Crash can jump and slide in the barrels. He can also switch between the three lanes by swiping in the respective direction. If we encounter boxes or want to knock turtles into a nitro heap, we can whirl Crash around with a quick tap

So while the controls themselves are not an obstacle to our success, the obstacles become more and more challenging over time. Fortunately, however, we can occasionally set checkpoints using special boxes, which at least save us from a complete restart in the event of failure.

Crash as we know it

While thanks to the many characters and the all-round coherent game world, a certain crash feeling arises in the story challenges, in the end it is the challenges that bring back old memories. On the Run has challenges ready for us in the form of sub-missions, which are presented by the wooden mask Aku-Aku.

At the beginning of a level, Aku-Aku gives us three tasks that we can do during our run. Whether we collect these on the side or focus explicitly on the challenges is up to us and in many cases depends on our needs. If we already have all the items we need for progress, we can leave the challenge running alongside. But if we are missing a reward, the targeted pursuit of the challenge can quickly contribute to progress.

The emphasis is on “can”, as the challenges are sometimes tough. Especially at the beginning it takes countless attempts before a challenge can be successfully completed. But in most cases we will die. And that multiple times. In order to keep the frustration in check, King has not only implemented rigid solutions, but also enables the levels to be mastered using many different approaches. If we are at a point with our Latin, a new attempt with a new approach could pay off.

There are a few things to collect across all levels. Whether we’re repeating an old run or tackling new challenges, all runs pay off in one way or another. Wumpa fruits and steps taken can be exchanged for trophies. These, in turn, enable us to climb the leaderboard and receive even more rewards.

In addition to the main goal of creating even more weapons, collected items can also make a contribution to our base. If we expand this, we can move forward faster in the future. Waiting times for weapons are shortened. When it comes to progress, we come to a component that is now predominant in smartphone games: microtransactions. Since On the Run is basically a free game, it is of course the microtransactions that the manufacturer wants to earn money with.

There is no real coercion here, as we have seen in many a game. All levels and games can also be played completely without using real money. We only have to use our patience in exchange for this. In some places it simply takes a lot longer until we have acquired the required item. Purple crystals can be exchanged for skins and costumes, for example, which in turn give us new skills.

While we can also purchase these in the shop, it is also possible to play them. But it takes a lot more time. Buying time is also a component in multiplayer mode, which we will come to in a moment. In the end, we can earn almost anything in On the Run without spending a penny. All we need is time and perseverance.

Blessings and a curse in multiplayer

While the main elements of On the Run take place in single player mode, the game developer King has also implemented a multiplayer mode. We can compete against friends and players from all over the world in asynchronous runs. You fight in survival runs against two other players. We match our competitors for survival across continuously generated levels.

As in the single player mode, there are always items to be collected and countless obstacles to be overcome. While the multiplayer battles are a lot of fun, they also come with a little nerve factor. In order to be able to take part in multiplayer runs, we have to use a ticket every time. We receive one ticket per day. Free tickets and other rewards can also be purchased through the machine and by viewing advertisements. But if we still don’t have enough tickets, they have to be bought.

Crash Bandicoot: On the Run brings a lot of fun thanks to the entertaining levels for longer sessions as well as for the little round in between. Thanks to lovingly designed worlds and lots of elements, fans of the game series will immediately feel at home. The different levels and modes bring enough variety. The use of microtransactions, especially in multiplayer mode, is a bit annoying.

Crash Bandicoot: On the Run is available for free on iOS and Android.

Berlin schools in the pandemic: the experiment continues

Pinturault is writing a piece of skiing history – Alpine skiing

Corona: dark chocolate and green tea against fighting the virus?

That is why Michelle Gisin is driving stronger than ever before

Against the stimulus package: Trump’s revenge