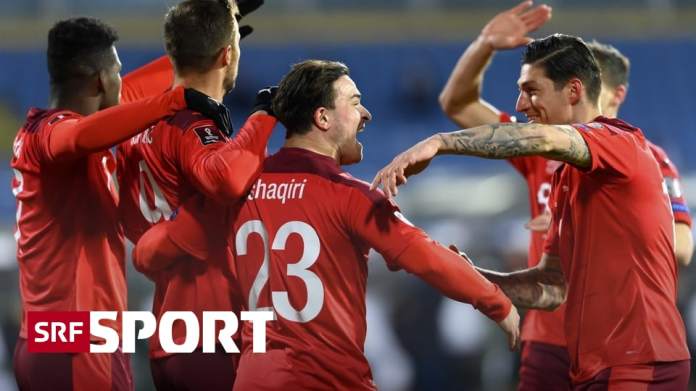 After a quarter of an hour of playing, he could finally assess whether it would be something from a Swiss point of view against the Bulgarians, said SRF expert Beni Huggel in the run-up to the game. Well, the analysis shouldn’t have been too difficult for him at the time mentioned.

Because the Swiss started like the fire brigade, even made a start steeped in history. After exactly 12 minutes of play, the Petkovic squad was already leading 3-0 – this had never happened in the history of the senior national team.

So the game was apparently decided early. At this point in time, the completely overrun Bulgarians had 5 (!) Passports on their account, while Switzerland had everything under control. Even when the team around ball distributor Granit Xhaka downshifted a few gears, there was an impressive 74 percent possession during the break.

In the second half, however, with the lead in the back (and in the head), Switzerland then reduced a lot. The first shock only 44 seconds after the restart: Freuler played blindly to the middle and into no man’s land. Kiril Despodov stormed up and scored with a direct shot against the “shifting direction” of goalie Yann Sommer to 1: 3. The goal scorer injured himself during this action and had to leave the field.

The ease of the red-and-whites from the first round was gone, Bulgaria came up better. After an hour, Captain Georgi Kostadinov checked Sommer with his head, but the latter threw up his hands and skillfully parried. The Swiss freestyle developed into a work victory. In the end, Bulgaria lacked the quality to really put their opponents in trouble.

In the end, the expected 3 points remain on the Swiss account. The next game is on Sunday in St. Gallen against Lithuania (from 20:20 on SRF two).

Old B27 bridge in Kornwestheim blown up – SWR news

Hertha against Werder under pressure! Labbadia’s third reunion with Ex-Club...