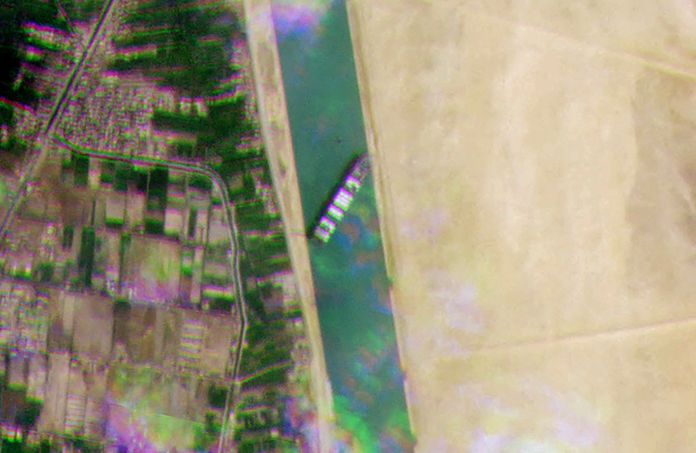 The attempts to rescue the “Ever Given” are progressing – but only slowly. Now the rescue workers are hoping for the upcoming full moon.

There has apparently been slight progress in the rescue attempts for the container ship that ran aground in the Suez Canal. The channel service provider Leth Agencies announced on Saturday that specialists have made some progress with clearing the stern of the “Ever Given”.

They rely on a combination of heavy tugs, suction dredgers and the spring tide, said the boss of the Dutch salvage company Boskalis, Peter Berdowski. The tide will be up to 50 centimeters higher than normal on Saturday because of the upcoming full moon.

According to Berdowski, the ship’s bow is stuck in the loamy sand of the shore. It’s not that bad at the stern. “This is positive because you can use the back end to pull it free,” he said on Dutch television show Nieuwsuur. Now two tugs are on their way into the canal. “We hope that the combination of the tugs we will have there, more dredged ground and the tide will be enough to free the ship sometime early next week,” said Berdowski. If that’s not enough, you would have to unload hundreds of containers. A crane for this is on the way.

The almost 400 meters long and 59 meters wide container ship ran aground on Tuesday about six kilometers from the southern entrance to the canal and was wedged between the two banks. The Egyptian Prime Minister Mustafa Madbuli spoke of a very extraordinary incident. Around 280 ships were already waiting in front of the two canal entrances on Saturday for passage. After an analysis of ship data by the data service provider Refinitiv, more than 100 more were on their way there. Others already accepted the detour around the African continent.

Shipping company boss Yukito Higaki said on Friday evening that at least ten tugs were in use. Sand is also being dug up near the ship’s bow on the bank and at the bottom of the canal. It is hoped that the “Ever Given” will be released when the water sinks again after the flood. If that doesn’t work, you have to unload containers to make them lighter. There should be at least two attempts on Saturday.

Technicians pump water out of the ship

The head of the canal authority, Osama Rabei, spoke of a complicated operation that required several attempts. Media was not allowed near the freighter. A press conference in Suez was announced for Saturday. Bernhard Schulte Shipmanagement, the company responsible for the technology on the “Ever Given”, declared that they wanted to pump ballast water out of the ship to make it easier.

The Suez Canal shortens the route for merchant ships between Asia and Europe by several thousand kilometers. Ten percent of world trade runs through the artificial waterway between the Mediterranean and the Red Sea. Because the end of the disaster was not yet in sight, shipping companies have started to let their freighters sail around the Cape of Good Hope at the southern tip of Africa, as satellite images show. Among them is the sister ship of the “Ever Given”, the “Ever Greet”.

2021: This is what the changes will look like for drivers...

North Korea: Kim Jong Un provokes the USA with the “most...