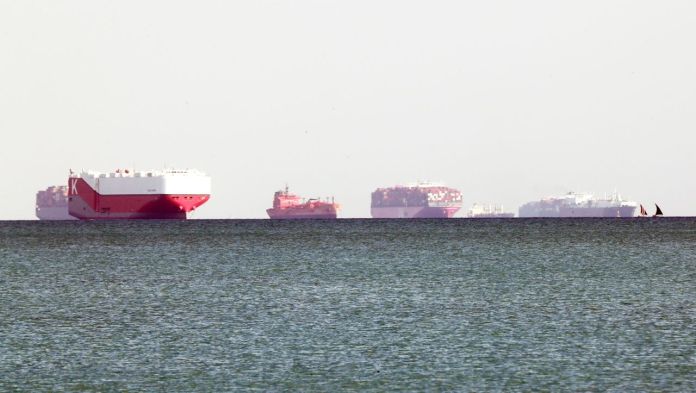 After the salvage of the stranded container ship “Ever Given” in the Suez Canal failed several times, international shipping companies are now redirecting their freighters. The world market leader Maersk from Denmark announced on Saturday that 14 of its ships would then travel around Africa instead of through the blocked canal. Large competitors such as Hyundai from Korea, Yang Ming from China and One from Singapore have also ordered several ships on the route along the Cape of Good Hope.
Germany’s largest container shipping company, Hapag-Lloyd, is also about to take this step. Eight Hapag-Lloyd ships are stuck in a traffic jam of more than 300 ships in front of the two canal entrances.
Weeks-long chaos in international freight traffic is inevitable. According to Maersk, the detour via the cape at the southern tip of Africa takes between five and eight days on the Western Europe-East Asia route and is around 3000 nautical miles long (a good 5500 kilometers).

The additional costs for the shipowners are likely to be bearable because the additional fuel costs are as high as the canal fees. But the entire, finely balanced schedules of the fleets and ports are now completely out of step. In many destination ports, there is a risk of further blockages if the delayed freighters from the Suez Canal and punctual ships from other origins arrive at the same time. The return transports are also delayed – especially those of empty containers, which have been in short supply in many Asian ports for months. If there are no more containers for the goods there, further delays are programmed. Or even complete delivery failures.

The traffic jam in the Suez Canal, which has persisted since Tuesday, is becoming more and more of a problem for the global economy. According to an estimate by industry experts at Lloyd’s List, goods worth around 9.6 billion US dollars (around 8 billion euros) are transported through the channel on normal days: durable consumer goods such as furniture, entertainment electronics, fitness equipment – but also components for cars or chemical products, the absence of which could bring industrial production to a standstill in Europe or Asia.

At the Suez Canal, the hoped-for exposure of the “Ever Given” is progressing in small steps, according to those involved. The canal authority did not want to give a time frame on Saturday. The salvage company Smit Salvage, on the other hand, was more optimistic.

Even before the accident, the situation in global container traffic was tense. Many ships going west are full to the brim because the demand in Europe and Asia for goods from the Far East is currently extremely high. Reserve capacities can hardly be mobilized. And since there is no telling when the “Ever Given” will be released, many shipping companies are now playing it safe and accepting the delay on the Cape route.
According to calculations by the Copenhagen analysis company Sea Intelligence, the total global freight capacity is reduced by six percent through these detours alone, as the ships are only available for the next tour later. This will have “global consequences” and lead to “serious capacity shortages,” Sea Intelligence predicts in an email to SPIEGEL.

Saarland: man saunas on the roadside – and the police arrive

Vaccination breakdown in MV: Another nurse in the hospital | ...

Why more new money is flowing into ETFs than ever before

FIS cancels the Lauberhorn race in 2021