The most expensive traffic jam in the world has been resolved, but …

The almost one-week blockade of the Suez Canal by the problem pot “Ever Given” can result in heavy costs for the insurance industry through a long chain of billions in claims for damages.

According to Allianz in Munich, a whole range of different damage reports and claims are conceivable that could affect the insurance industry.

Claims in the three-digit million range?

Régis Broudin, the manager of the Allianz subsidiary AGCS, who is responsible for marine damage reports, writes that the high cost drivers include the possible claims of the canal operator and the claims of the many ships that were stuck in the canal for days.

But: “For the AGCS it is not yet possible to foresee whether and to what extent we will be affected by the damage caused by this incident,” said a spokeswoman for the company in Munich.

The rating agency Fitch assumes that in the end the reinsurers – i.e. the companies with which insurance companies insure themselves – could accumulate claims in the three-digit million range worldwide.
According to Fitch, however, reinsurance companies can cope with the financial consequences well, among other things because, according to the rating agency, rising prices in reinsurance will be a consequence of the traffic jam.

How are the pots usually insured?

Freight ships are usually insured against liability through so-called “Protection & Indemnity Clubs”. These are mergers of several insurers who share the risks.

According to reports in the trade press, this is the British UK P&I Club for “Ever Given”, which has not yet published a loss estimate.

Who pays for the damage to the sewer?

According to various reports, over 300 ships were stuck in traffic at both ends of the canal. In addition, several shipping companies have already diverted large ships onto the much longer sea route around southern Africa. These ships will also reach Europe and Asia with a delay.

Luck in misfortune: the cargo ship “Ever Given”, which was towed free on Monday and transports 20,000 containers, is insured. It is currently being checked whether the hull and machines have been damaged.

The canal authority Suez Port Authority could, according to Allianz, under certain circumstances file claims for damages due to damage to the canal and lost revenue.

Apart from the many different parties involved in the shipping industry, damage reports can also be made by companies who have sent goods and products via one of the delayed ships – or are now waiting as recipients for delayed deliveries.

If there are business interruptions in factories because parts necessary for production are missing, this can also result in damage reports.

Despite the end of the Suez Canal blockade, the German chemical and pharmaceutical industry is warning of long consequences for trade. The normalization of traffic to and from Asia will proceed only slowly.

“The supply chains were already under pressure before the event and will remain so for several weeks, also because the existing bottleneck in containers is initially increasing due to the backlog in front of the canal,” said Henrik Meincke, chief economist of the VCI industry association

The Suez Canal is of great importance for the German economy. This also applies to the chemical industry with around 464,000 employees in this country: around 16 percent of chemical imports from Asia come by ship through the Suez Canal. At the same time, 18 percent of chemical exports go through the waterways to Asia. According to VCI, these include chemical products such as industrial gases, fertilizers, paints, plastics, man-made fibers, pesticides and adhesives.

The meaning behind Meghan’s look in the Oprah interview 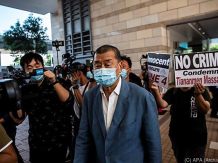 Hong Kong media mogul Jimmy Lai must be in custody –...