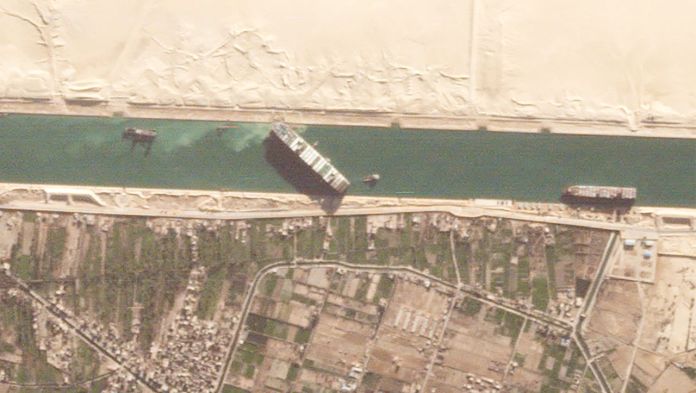 Nobody knows when the “Ever Given” will pick up speed again. The 400 meter long and 59 meter wide container ship ran aground on Tuesday – probably due to strong winds and poor visibility. Since then it has been stuck in the Suez Canal, one of the most important waterways in the world. The pot, which is owned by a Japanese company, is blocking passage through the canal for hundreds of other ships, tracking data shows. This results in gigantic costs, and the global supply chains for goods come to a standstill.
The recovery of the “Ever Given”, which lies across from the city of Suez on the northern tip of the Red Sea, is apparently no small matter. The ship is stuck in the bank fortifications on both sides. It could take days or weeks, depending on who you believe; the latter said at least one company involved in the rescue operation. The Japanese owner company, on the other hand, hopes that the ship will be afloat again this weekend.
At the moment the experts are relying on tugs to pull the bow of the “Ever Given” back into the river. There is also hope that the tugs’ propellers will, so to speak, blow sediment away from under the bow of the giant container. However, ten such ships have tried so far without success.

So amateur engineers around the world are likely to be debating what to do now. A strategy was also discussed, which at first sounds completely absurd: the use of helicopters. In fact, employees of the Egyptian canal authority are said to have speculated about this possibility. In this way, one could gradually unload the ship’s cargo. By reducing the weight, it may be possible that the giant container can be pulled from the bottom more easily.

An interesting approach. It is unclear how many containers are currently on board, but the pictures show the ship close to the waterline. It can transport up to 20,000 containers. Each of these containers weighs around two and a half tons when empty, and a good 30 when fully loaded.
With this load, helicopters reach their limits. The Sikorsky CH-53K King Stallion is considered the most powerful transport helicopter in the US armed forces. But even with its three engines, it can only move around 16 tons. Even the Russian Mil Mi-26, the world’s most powerful and largest production helicopter, can only lift around 20 tons in the air, according to a report. There was once a machine that could move loads like this: the Mil Mi-12, the largest helicopter ever built. But only prototypes were built, which are now in the museum.
The Mil Mi-26, from which two machines are operated by the Jordanian armed forces, can only move lighter containers. And that too would take time. To lighten the ship by 5000 tons, one would have to undertake hundreds of flights.

In principle, such missions have already been carried out. When the 180-meter-long container ship “Kea Trader” ran onto a reef in 2017, Sikorsky Skycrane helicopters were later used to retrieve the containers.

Experts usually rely on a three-stage strategy for such accidents: a combination of excavators, the use of tugs and, if necessary, weight reduction.

An excavator is currently working on the bank, removing earth around the mighty bulge of the bow. A special suction excavator is also to be used. It can move around 2000 cubic meters of material per hour, announced the sewer authority. According to this, between 15,000 and 20,000 cubic meters of sand would have to be removed from under the ship. Then a depth of twelve to 16 meters is reached, which is sufficient to bring the ship free to swim again.
If that doesn’t work, the steel structure weighing around 224,000 tons will probably have to slim down. Ballast water is usually drained off first. Usually the ballast system helps the ship to compensate for irregular weight distribution and to lay it evenly on the waterline. A ship of this size can have up to 20,000 tons of water on board, reports a former captain to SPIEGEL, who has crossed the canal several times.
Another option is to pump out fuel, but for this purpose appropriate tankers have to travel to the location of the accident. And in the case of the “Ever Given,” that may not be enough to make it light enough, experts suspect.

But even these two steps are associated with enormous effort and not without risk. First of all, a stability calculation is made, because you cannot simply take any water and fuel and lighten the ship below while heavy containers are on top. In the worst case, it could tip over, so water and fuel must be drained evenly from the various tanks.

The next option is to unload the load evenly and gradually. With floating cranes, however, that would be a complex operation, because first they would have to be brought close enough to the ship and large enough to reach the topmost container. Here, too, it is questionable how quickly the appropriate device can be brought to Suez.

Special ships that are needed for the construction of offshore wind turbines can possibly be used here. But unloading the containers is not easy either. Because a ship cannot simply be unloaded from one side; there is a risk that it will be unbalanced. The load must be removed evenly.

If all other attempts fail, in the end one will try to pull the ship, which is at least somewhat lighter and dredged, out of the bank with tugs. Such strategies have already been successfully implemented several times. You don’t even have to look to distant lands for one of the most spectacular actions. In 2016 the “CSCL Indian Ocean” near the port of Hamburg was freed from the Elbe. The giant container, which was almost as long, wrecked when the steering gear failed.

The ship ultimately had to be lightened by more than 6,500 tons, 250 tons of which were fuel. Back then, suction dredgers removed 45,000 cubic meters of sediment before the ship could be towed free by twelve tugs. The action lasted almost nine days at the time.

“The unexpected is what makes life exciting”

Selena Gomez: After more than ten years: she sings in Spanish...