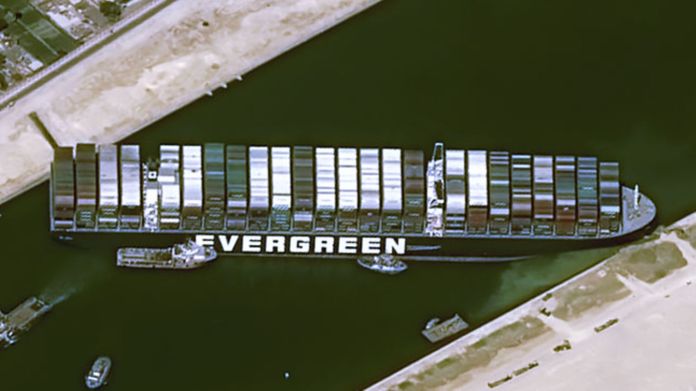 See in the video: “Ever Given” continues to block the Suez Canal – worries in the economy are growing.The 400-meter-long container ship “Ever Given” lies like a “stranded whale” in the Suez Canal, blocking traffic. Several tugs tried to move the huge ship on Thursday. Initially without success. A spokesman for a salvage company was quoted as saying that it could take weeks before the trip in the canal was free again. The rescue workers are now hoping for the weekend when the tide will push hard into the waterway between Europe and Asia. The container ship got stuck on Tuesday morning in a strong wind. In the German economy, meanwhile, there is growing concern about the supply chain being interrupted by the blocked Suez Canal. “Around 16 percent of chemical imports come by ship through the Suez Canal. The machine and plant manufacturers are also looking at the damage in the canal with concern. There are fears of delays in delivering machines, machine parts and components to Asian customers The current situation on the Suez Canal will probably only become noticeable in a few days. If the ships can cross the Suez Canal again, traffic jams will occur at the ports. The 193 kilometer long canal is the shortest connection between Europe and Asia and the crucial corridor for crude oil and imported goods to Europe Dozens of ships were seen in front of the canal on Thursday that were unable to continue due to the blockade.

The wrecked “Ever Given” is still stuck in the Suez Canal, but the recovery work has made progress recently. The Japanese owner is optimistic, the US Navy offered help.

According to the owner, “Ever Given” is undamaged

The owner of the container ship “Ever Given”, which is stuck in the Suez Canal, is hoping that the freighter will be salvaged later that day. There are no indications that the ship’s engines have been damaged, said the head of the Japanese company Shoei Kisen, Yukito Higaki, according to Japanese media reports at a press conference. The aim of his company is to “free” the giant container on Saturday evening Japanese time.

No water got into the “Ever Given”. There are also no problems with his rudder or the propellers. “As soon as it moves again, it should be operational,” Higaki assured, according to the Japanese newspaper Asahi Shimbun. Work on removing sediment under the bow continued. “Additional dredging equipment” would also be used.

The 400-meter-long and more than 220,000-tonne container ship “Ever Given” had gone off course in a sandstorm and ran aground near the banks of the Suez Canal. Since then, it has blocked the waterway between the Red Sea and the Mediterranean Sea, and all ships in it cannot continue. Most recently, more than 200 ships were stowed on both sides of the canal. German companies also fear delivery bottlenecks.

Efforts on site to get the ship free have been in full swing since Wednesday. However, there are fears that the rescue work could drag on for weeks. Another attempt to free the ship from its deadlocked position had failed on Friday. According to the Singapore-based company Bernhard Schulte Shipmanagement (BSM), who is responsible for the technical management of the container ship, two more tugs are expected in the Suez Canal on Sunday to help with the rescue.

In view of the ongoing blockade, the US Army offered its support on Friday (local time). “As part of our active diplomatic dialogue with Egypt, we have offered US assistance to the Egyptian authorities in reopening the canal,” said White House spokeswoman Jen Psaki in Washington. A team of experts from the US Navy could quickly be dispatched to the Suez Canal.

Talks with Cairo about US support were ongoing, Psaki added. US Central Command spokesman Bill Urban said the naval experts would be ready in the event of a request from Egypt. A central task of the Central Command responsible for the Middle East is the protection of the merchant ships in the region.

A US Department of Defense representative, who did not want to be named, said Washington had offered to send a team of experts from the Navy. If Egypt makes a formal request, the team could set out from the US naval base in Bahrain on Saturday.

In addition, the US Army could advise and support the workforce of ships that, because of the blockade of the canal, decided to detour via the Cape of Good Hope, i.e. around Africa, and could encounter pirates in the process. “We can certainly advise, but we cannot escort them all,” said the US representative.

Relaxation of the corona measures – the first cantons are demanding...

“Am I smarter than …?”: Peter Kloeppel does not recognize RTL...

Now we are threatened with another 10 weeks of lockdown policy