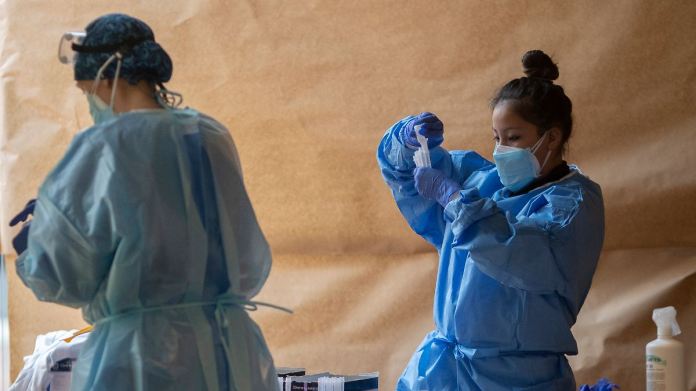 The virus variant B.1.1.7 has already spread in most European countries. The WHO calls for more vigilance for other mutations as well. Because the promising decline in corona cases in recent weeks has now been reversed again.
More than half of the countries in Europe have seen an increase in infections with the coronavirus in the past week. As the European Office of the World Health Organization announced, the number of new infections has increased by nine percent. That ended the promising decline of the past six weeks.

Virus variant B.1.1.7, which first appeared in Great Britain, has now appeared in 43 of the 53 European countries. The South African mutation B.1.351 was reported in 26 countries, the Brazilian variant in 15 countries.

The Regional Director of WHO / Europe, Hans Kluge, called on countries to be more vigilant for variants with increased portability. “We have to suppress the spread of the virus everywhere by using the means that we know will work,” said Kluge. It is particularly important to test and isolate sick people and to follow up on their contacts.

Vaccination has now started in 45 countries in the European region and positive effects have been registered. In countries like Israel and Great Britain, where the vaccination rate is very high, the number of deaths and hospital stays of people in the risk groups has decreased.

The corona numbers have also risen recently worldwide. After six weeks of decline, new infections increased by seven percent in the last week of February, according to the WHO. Accordingly, 2.6 million cases were reported to the UN agency in Geneva.

On the occasion of the upcoming Women’s Day on March 8, Kluge emphasized that the pandemic had exacerbated structural inequalities between the sexes. Because many women work in health care, they are at high risk of becoming infected. They are paid less than men and are often responsible for homeschooling the children.

Xiaomi Redmi 9A: At Media Markt and Saturn cheaper than ever

No money because of Corona: the crisis makes Berlin’s criminals even...

These are the best tweets about the finale of “The Masked...

iPhone 11 in the Black Friday deals: Saturn knocks out Apple...