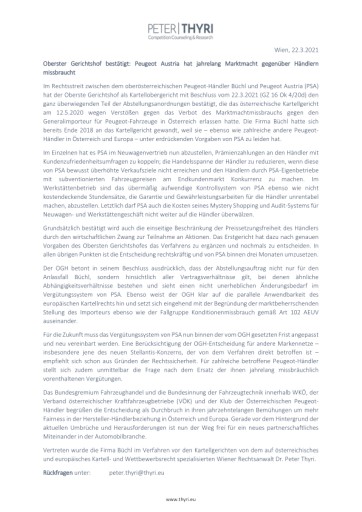 Vienna, (OTS) – By order of March 22, 2021, the Supreme Court, as the cartel court, ordered the general importer for Peugeot vehicles in Austria to put an end to the abuse of their dominant position within three months.

In the legal dispute between the Upper Austrian Peugeot dealer Büchl and Peugeot Austria (PSA), the Supreme Court, as the cartel court, confirmed the vast majority of the removal orders that the Austrian cartel court issued on May 12, 2020 for violating the prohibition of abuse of market power against the general importer for Peugeot- Vehicles in Austria. The Büchl company had already appealed to the cartel court at the end of 2018 because it – like numerous other Peugeot dealers in Austria and Europe – had to suffer from overwhelming requirements from PSA.

“This is a trend-setting decision not only for the Austrian and European vehicle trade, but also for the maintenance and workshop area. An essential step towards regaining commercial freedom, which paves the way for a new start to a partnership with the vehicle manufacturers “, emphasize KommR Ing. Mst. Klaus Edelsbrunner, Federal Chairman of the Federal Vehicle Trade Committee, KommR Mst. Josef Harb, Federal Guild Master of the Federal Guild of Vehicle Technology and Stefan Hutschinski, chairman of the Association of Austrian Motor Vehicle Companies (VÖK).

In the legal dispute between the Upper Austrian Peugeot dealer Büchl and Peugeot Austria (PSA), the Supreme Court as cartel court ruled on March 22, 2021 (GZ 16 Ok 4 / 20d), confirmed the vast majority of the discontinuation orders that the Austrian cartel court on May 12. 2020 because of violations of the prohibition of the abuse of market power against the general importer for Peugeot vehicles in Austria. The Büchl company had already turned to the cartel court at the end of 2018 because – like numerous other Peugeot dealers in Austria and Europe – it had to suffer from overwhelming requirements from PSA.

Specifically, PSA now has to stop coupling premium payments to the dealer with customer satisfaction surveys in new vehicle sales; to reduce the sales margin of the dealers if they do not achieve deliberately inflated sales targets by PSA and to compete with the dealers through PSA own operations with subsidized vehicle prices on the end customer market. In the workshop operation, the overly complex control system of PSA as well as non-cost-covering hourly rates, which make guarantee and warranty work unprofitable for the dealers, must be turned off. Ultimately, PSA is also not allowed to pass on the costs of its mystery shopping and audit system for new car and workshop business to the dealers.

The one-sided restriction of the retailer’s freedom to set prices due to the economic compulsion to participate in promotions is also confirmed in principle. For this purpose, the first court has to supplement the procedure and decide again according to the precise instructions of the Supreme Court. In all other points, the decision is final and must be implemented by PSA within three months.

In its resolution, the Supreme Court expressly emphasizes that the removal order applies not only to the Büchl case, but also with regard to all contractual relationships in which there are similar dependencies and sees a not inconsiderable need for changes in the remuneration system of PSA. The Supreme Court also clearly points to the parallel applicability of European antitrust law and deals in detail with the justification of the dominant position of the importer as well as the case group of abuse of conditions according to Art 102 TFEU.

For the future, PSA’s remuneration system must now be adjusted and re-agreed within the deadline set by the Supreme Court. Consideration of the Supreme Court decision for other brand networks – especially those of the new Stellantis Group, which is directly affected by the proceedings – is recommended for reasons of legal certainty. For many of the Peugeot dealers affected, the immediate question arises as to the replacement of the remuneration that has been abusively withheld from them for years.

The Federal Vehicle Trade Committee and the Federal Vehicle Technology Guild within WKÖ, the Association of Austrian Motor Vehicle Companies (VÖK) and the Club of Austrian Peugeot Dealers welcome the decision as a breakthrough in their decades-long efforts to ensure more fairness in the manufacturer-dealer relationship in Austria and Europe. Against the background of the current upheavals and challenges, the way is now clear for a new partnership in the automotive industry.

The Büchl company was represented in the proceedings before the cartel courts by the Viennese lawyer Dr. Peter Thyri.

The federal government only wants to support the large airports: Bremen...

NBA: Now Clint Capela is the boss at Atlanta