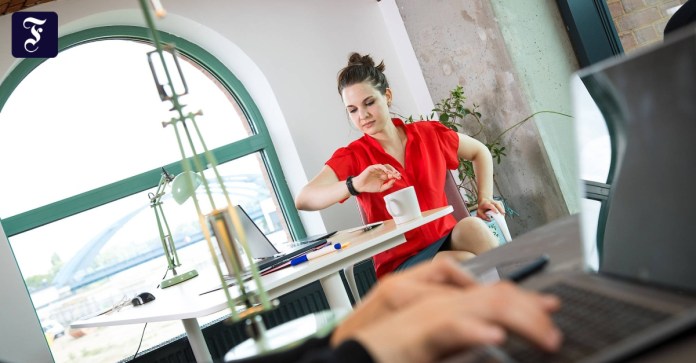 Dhe Germans want ever shorter working hours. On average, men would prefer to only work 36 hours a week, even if that has consequences for their wages. This is the lowest value since at least the year 2000. This is what an evaluation by the German Institute for Economic Research (DIW) for the FAS shows. The information relates to the most recent available year, 2018.

It was not until Saturday morning that employers and unions in the north-west German metal industry agreed on a collective agreement: It enables the additional money paid to be used to secure jobs and to convert it into free time.

In the early noughties, working time requirements in Germany continued to rise. However, the trend reversed around the time it became apparent that the country had overcome its high levels of unemployment. Since then, leisure time has apparently been gaining in importance for people.

The differences between men and women have shrunk over time: while women wanted to work nine hours less than men in 2000, it is now only six and a half hours.

The information comes from the so-called “socio-economic panel” (SOEP), for which around 30,000 people in Germany are surveyed each year. It is the largest and oldest survey of its kind in the world. The full question is: “If you could choose the amount of time you worked, taking into account that your earnings would change with the hours, how many hours a week would you most like to work?”

Corona: Waiting for vaccination to start in the EU – virus...

Comment: Berlin’s derby is on the way to becoming a classic

Rocket Lake S processors are not compatible with all 400 motherboards

“Barbarians” and “Freud” among the most popular Netflix series worldwide

Farmer looking for a wife: Emergency operation – postman runs over...