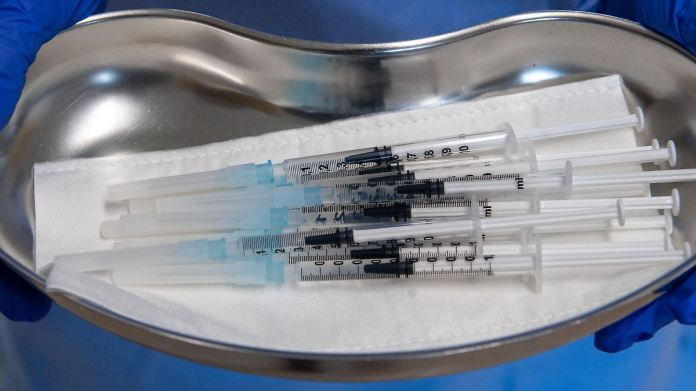 A nurse in the Allgäu dies after being vaccinated with the Astrazeneca active ingredient. The cause is likely a blood clot in the brain. If the suspicion is confirmed, it would be the 15th case in Germany with this connection. So far almost only women have been affected by the thrombosis.
In connection with the Astrazeneca vaccination, further cases of blood clots in the brain are known in Germany. In the Allgäu, a 55-year-old nurse died after being vaccinated with the Astrazeneca active ingredient with suspected cerebral vein thrombosis, as the Kempten Clinic confirmed to the “Augsburger Allgemeine” and “Allgäuer Zeitung”.

According to the report, the nurse, who works in a clinic in Immenstadt, was vaccinated on March 3 with the first dose of Astrazeneca. After seven to eight days, she suffered from severe symptoms and came to the hospital with a severe headache. The woman died on Saturday in Kempten. The doctors therefore assume a cerebral vein thrombosis and a very high probability that the nurse’s death is related to the vaccination.

According to the Paul Ehrlich Institute (PEI), which is responsible for the safety of vaccines, the number of reported sinus vein thromboses, a special form of cerebral vein thrombosis, had increased to 14 by last Friday after vaccination with the Astrazeneca vaccine. So far there have not been any more recent figures. The nurse would therefore be the 15th case in Germany in which such a thrombosis occurred after the vaccination.

Almost all women between the ages of 20 and 63

With the exception of one case, all reports concerned women between the ages of 20 and 63, as a PEI spokeswoman for the “Augsburger Allgemeine” said. In nine of the cases, the serious cerebral vein thromboses occurred in connection with a lack of blood platelets. There were several deaths.

The EU Medicines Agency (European Medicines Agency, EMA) had declared the corona vaccine from the British-Swedish manufacturer Astrazeneca to be “safe and effective” last Thursday after a review. The benefits outweigh the risks, according to reports of cerebral vein thrombosis related to the vaccination. In Germany, the temporarily suspended vaccinations with Astrazeneca were then resumed.

Germany versus Iceland: That’s why the message of the DFB-Elf stirs the minds – football

Whirl around tweet from Moscow: Riots in the Wirecard U committee

Nord Stream 2 sanctions? Dispute between the USA and Germany escalates

AstraZeneca in Berlin: “A fairy tale that vaccine is left lying around”

No return flight to Germany without a corona test

How safe is the vacation now?

Weather in Germany: is spring coming back in April? Expert is skeptical

Older people have an increased risk of renewed corona infection

Alpha gameplay and developers reveal a lot of details

Berlin & Brandenburg: Berlin Senate: No tightening of the corona rules

The outlook for real estate in 2021

This is how it continues in the impeachment process

Sled slopes in the Stuttgart region: due to overcrowding, some people...