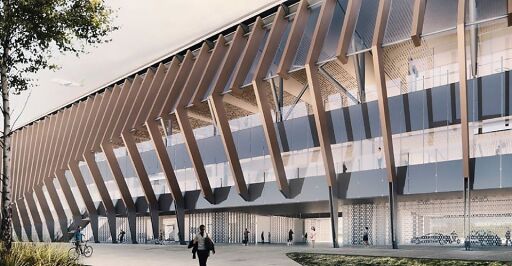 The commitment in Latvia once again underlines the company’s international competitiveness. Our specialists have mastered the most modern technologies and are therefore able to ideally meet complex customer requirements.

Linz / Fischamend (OTS) – Rail Baltica is a new railway connection under construction that will run from Warsaw in Poland via Lithuania, Latvia and Estonia to Helsinki in Finland. All EU member states on the route are involved in this. The project is one of the most important European and EU-funded infrastructure projects.

On behalf of the Latvian project company EDZL, Austria’s track construction specialist SWIETELSKY will build the railway station and the infrastructure of Rail Baltica at the airport in the Latvian capital Riga. For the construction project, the Austrians have formed a joint venture with the Latvian companies SIA BINDERS and AS LNK Industries. SWIETELSKY is a European leader in railway construction and is internationally successful in 19 countries. With complex large machines, the company has revolutionized and shaped railway construction in terms of efficiency and occupational safety. In Latvia, too, the user know-how was in demand as the best bidder against well-known European competitors from France, Spain, Italy and Turkey, among others.

The work is to be carried out in five phases from 2021 to December 2025. Components of the order are the production of the station building with 2 floors from a steel construction with wood / glass facades including the connected infrastructure, viaducts, noise protection measures, access roads, overpasses, embankments, a railway bridge over the motorway and a total of 16 km of railway line. The two tracks will be designed for a speed of 160 kilometers per hour and contain seven switches. As the Swietelsky AG board member responsible for railway construction, Peter Gal emphasizes the importance of the major order: “The commitment in Latvia once again underlines the company’s international competitiveness. Our specialists have mastered the most modern technologies and are therefore able to ideally meet complex customer requirements.“

The Latvian Transport Minister Talis Linkaits was delighted with the signing: “The construction contract is a positive signal for the economy and will create hundreds of new jobs over the next five years and contribute to the region’s economic growth.” Strengthening Riga as a Baltic air transport hub. This will enable convenient traffic between Riga and the regions of Latvia. Linkaits believes that the airport will also be more accessible for the residents of Lithuania and Estonia.

Kaspars Vingris, chairman of the Latvian project company EDZL, added that the creation of the new infrastructure will also enable the expansion of cargo handling services. This could help to strengthen Latvia’s status as an international destination and transit country. “The construction project is large and complex. 32 institutions were involved in its preparation under difficult – pandemic – conditions ”, said Vingris on the occasion of the signing of the contract.

Corona in the Forchheim district: the incidence value drops over the...

Stage win for Democrats in US Senate election in Georgia