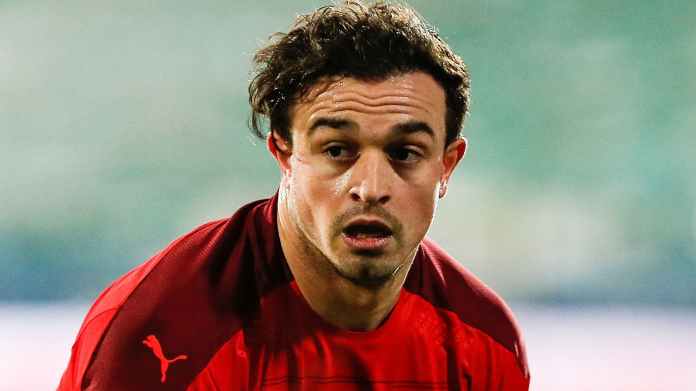 Xherdan Shaqiri expects an uncomfortable evening in St. Gallen in the World Cup qualification against Lithuania on Sunday: “Small teams are very aggressive and make a lot of fouls.”

Switzerland versus Lithuania in St. Gallen: Wasn’t there something? Correct! On November 15, 2014, Switzerland won the fourth international match under national coach Vladimir Petkovic against the Eastern Europeans in Kybunpark 4-0. Four goals within 24 minutes turned the full arena into a festival hut in the final phase. That’s why Xherdan Shaqiri, who scored two goals at the time, said before Sunday’s game against the same opponent: “We have many very good memories of this stadium.”

The atmosphere from back then will actually only remain a fond memory this time. Spectators are still not allowed. The Kybunpark will be deserted. But the SFV is trying to bring a little ambiance into the stadium. During the game, the photos of 100 fans are displayed on an LED board around the playing field. Banners in the stands will be stretched over this, on which the national team thanks the audience for their virtual support.

After the 3-1 win at the start in Bulgaria, Petkovic has the second compulsory task in World Cup qualification to show the team that they are better than their opponents for 90 minutes this time. But he also pointed out that it was “difficult to be better than in the first half against Bulgaria”. Thanks to three goals, the Swiss were already 3-0 within six minutes after 13 minutes. A drop in performance like in Bulgaria in the first 20 minutes after the break should be avoided. Petkovic: “Mistakes can happen, but we have to learn to stay calm afterwards.”

It is precisely because of this weaker phase in Sofia that Petkovic draws a bow to the best teams in Europe. “I’ve seen pictures of Italy’s game against Northern Ireland and read about it. The Italians were very dissatisfied with the second half. We’re still in good shape: our bad phase lasted only 20 minutes. ” And he added: “France and Spain even conceded the equalizer against Ukraine and Greece after the break.” Petkovic concludes: “What happened to us in Bulgaria can happen to anyone.”

“Blue Sport” editor Marko Vucur classifies the victory of the national soccer team against Bulgaria in the first World Cup qualifying game. Even if it wasn’t a freestyle yet, the duty has been fulfilled – and that’s what it’s all about. Even if critics may see it differently.

For the second game in the World Cup qualification within 72 hours, Petkovic should trust the same starting lineup as against Bulgaria. «The medical bulletin gives no signs of injuries. Almost all players are used to playing a game every three to four days. ” That means nothing else than that Nico Elvedi, Manuel Akanji and Ricardo Rodriguez defend in front of goalkeeper Yann Sommer. In midfield, Kevin Mbabu and Steven Zuber play on the sides, in the middle are Captain Granit Xhaka and Remo Freuler, and in front Shaqiri, Breel Embolo and Haris Seferovic storm.

This team is faced with a selection that has gradually slipped into the back ranks of world football in recent years. In the Nations League last autumn, Lithuania only avoided falling into the fourth and lowest division in the last game with a win against Kazakhstan. There was only one point in the European Championship qualification, and on Wednesday the selection of coach Valdas Urbonas in a test match was defeated 0: 4 by the Swiss Bernard Challandes trained Kosovo.

Petkovic still demands “the greatest respect for the opponent” from his team, because Switzerland has been able to avoid serious missteps against blatant outsiders with this mentality in recent years. And Shaqiri also expects an uncomfortable evening against the FIFA number 129: “Small teams are always very aggressive and make a lot of fouls.”