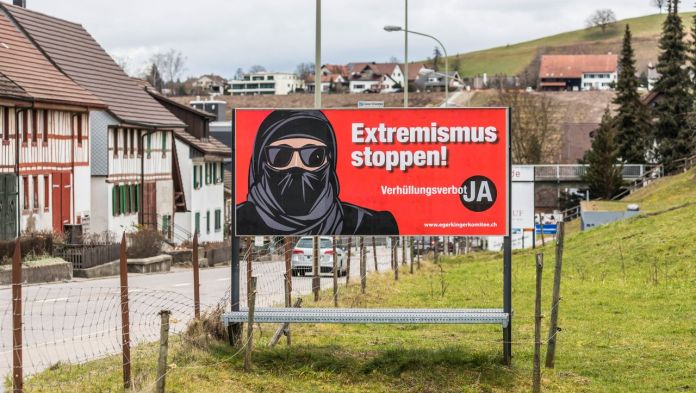 “Of course, it’s completely pointless!” Hanspeter Krüsi laughs so happily that it is contagious even through the phone. “There is nobody in the canton who wears a burqa or a nikab. So there have been no fines, no convictions, nothing at all in the last two years. ”
Krüsi heads the communications department of the St. Gallen Police Department – he currently has to talk more often about a law that does not cause his police officers any work: in the canton of St. Gallen, a ban on covering has been in place for two years. But the police have not found a single woman wearing a burqa for two years.

A similar ban could soon apply throughout the country: on Sunday, the Swiss will vote on an initiative that wants to write the regulation in the Swiss constitution that has shown itself to be “completely pointless” in St. Gallen. It’s causing quite a stir in the country.

The proponents’ posters have been hanging out across the country for weeks: in the well-known harsh propaganda style of the Swiss national conservatives, they show the caricature of a woman with a face veil, large eyes and an angry frown. Next to it is: »Stop extremism! Disguise prohibition yes «.

Specifically, an article 10a is to be introduced in the Swiss Federal Constitution, which says: “Nobody may cover his face in public space or in places that are accessible to everyone.” To conceal the sex. ”

Behind this initiative is the notorious in Switzerland Egerking Committee – an association of right-wing conservative politicians, lawyers and publishers who have set themselves the task of stopping the »Islamization of Switzerland«.

One of the committee’s best-known successes dates back to 2009 – at that time the Swiss said yes to an initiative that to this day is used again and again as a warning example of the legal problems a direct democracy can cause. What can happen if the majority decides on the rights of a minority by referendum. More than 57 percent voted at the time to ban the construction of minarets. The ban has been in the constitution since then.

It’s about the hierarchy of religions

The Egerking Committee was always concerned with anchoring a hierarchy of religions in the constitution. Managing director Anian Liebrand says, for example: »You can live whatever you want. But we have a certain dominant culture, and that is Christian. «This idea can also be found in the current proposal against face veiling. In point 3 it says: »The law provides for exceptions. These only include reasons of health, safety, climatic conditions and local customs. ”

In other words: if you want to cover yourself up for “local” reasons, you can continue to do so.

According to official estimates, there are around 20 to 30 women in Switzerland who wear the nikab, a veil that only exposes the eyes. Almost all of them live in French-speaking western Switzerland. In Ticino, where there has also been a ban on covering up at the cantonal level for several years, only a few tourists from the Arab Emirates have been advised of the rule.

The Lucerne religious scholar Andreas Tunger-Zanetti fears that the ban, as in France, could even lead to more concealment. In an interview with the »Luzerner Zeitung« he outlines a “solidarity effect”. Muslim women could feel pushed into a corner and even put on the veil in protest – against a constitution that introduces more and more special rules against their religion.

Others suspect that the few women who wear Nikab today will not even leave the house in the future. Women who wear the burqa – a piece of fabric that additionally blocks the eye area with a grid and is known from Afghanistan – do not exist in Switzerland anyway. If someone wanted to force a woman to veil, there are already laws against it.

The journalist Tuğba Ayaz spoke to practicing Muslim men and women for the magazine of the »Tages-Anzeiger«, published in Zurich. Your recently published report “Among Muslims” depicts a mood that many Swiss Muslims are likely to share: exhaustion. Ayaz, who grew up in a Muslim family, also understood the research as an examination of her own roots: »Since my Koran lessons, I had only been to a mosque abroad – to marvel at its construction. I had no impression of Muslim life in Switzerland, no feeling for what it looks like, «she writes.

The conversations with experts, an imam, women wearing a headscarf and a Nikab woman (like almost everyone who wears the face veil in Europe, she has converted to Islam) give Tuğba Ayaz a complex picture. But one thing she encountered frequently in the conversations: The prejudices and stereotypical attributions that Muslims face in Switzerland lead to fatigue. Many, according to Ayaz, no longer feel like entering into this charged dialogue. Others, however, see it as their duty to educate.

For the Egerking Committee this exhaustion of the Muslims is a stroke of luck. Most of the opponents of the ban on veiling come from the political left – but that too is divided on this issue. Above all, it is female voters who otherwise never vote for right-wing causes, but who have sympathy for this initiative.

For example, the feminist Regina Probst, who used to work for Terre de femmes. She says she mostly agrees with Alice Schwarzer. On the phone, she tells of falling out with younger feminists on this issue – and stresses that it pains her to vote with the right-wing conservatives on Sunday. “The initiative has a taste and it doesn’t solve any problems,” Probst admits frankly.

Why did she vote yes anyway? “Nobody can deny that the burqa is misogynistic.”

It is this conflict that many voters face. Can one be against the burqa and against a burqa ban at the same time? And what is the message of the result?

The hurdles for a popular initiative are high in Switzerland: A constitutional amendment must be approved by the majority of the voters, but also by more than half of the 26 cantons. The latest polls predict a tight result: Most recently, 49 percent said they wanted to vote for the ban, 47 percent were against.

Vaccination expert: It may be necessary to withdraw the easing Exhibitions – Berlin – Parzinger: Returning Objects Even Without a Context...

Coronavirus clinic in Texas is not getting rid of vaccination doses

Vienna stock market expected to be slightly lower in the pre-trading...