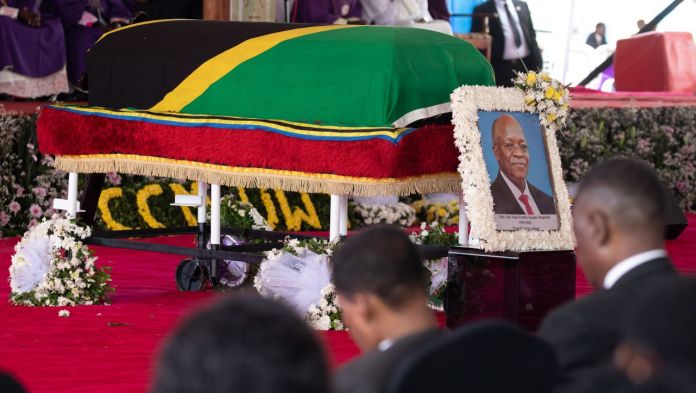 A mass panic in a Tanzanian stadium in Dar es Salaam killed 45 people as mourners paid their last respects to the late President John Magufuli, police said Tuesday. This means that the death toll is many times higher than originally announced after the disaster on March 21. “Numerous people” wanted to take part in the ceremony, Dar es Salaam police chief Lazaro Mambosasa told the AFP news agency on Tuesday. Some “impatient” people tried to make their way into the stadium and thus triggered the mass panic.
According to Mambosasas, several dozen people were injured in the accident. Shortly after the incident at Uhuru Stadium, only one woman and four children were reported to have died.
Magufuli had died two weeks ago. According to official information, the 61-year-old succumbed to a heart condition. The opposition, on the other hand, cited a corona infection as the cause of death.
On March 22nd, Magufuli was buried in a state funeral in the Tanzanian capital Dodoma. The previous weekend, his coffin had been laid out in the Uhuru Stadium in Dar es Salaam, the economic center of the East African country. There tens of thousands of people said goodbye to the deceased head of state.

Magufuli has been at the helm of Tanzania since 2015. Suluhu Hassan was sworn in as his successor. The 61-year-old is the first woman president of Tanzania.

Rising number of cases: are further easing possible at all?

Scope buys and hopes to become a heavyweight | Misc....

Grosjeans struggle for survival: How he was initially unable to free...

How to recognize fake AirPods Pro

Longer lockdown in Germany likely – until when?

Vaccination start in the Thalwil nursing home – why Doris Schwendimann...