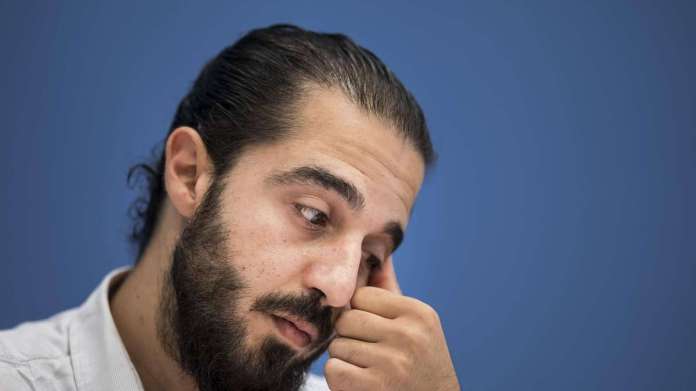 After racist threats, the Green Tareq Alaows withdrew his candidacy. He wanted to be the first refugee in the Bundestag. Foreign Minister Heiko Maas reacts.

Update from Tuesday, March 30th, 2021, 7:02 p.m .: The reactions of Berlin politicians to the racism-related withdrawal of Tareq Alaow are indignant. Federal Foreign Minister Heiko Maas calls the threats and verbal attacks on the Green politician “pathetic for our democracy”. Alaows deserved solidarity. Just like “everyone who volunteers and is hostile”.

Katrin Göring-Eckardt, leader of the Greens in the Bundestag, is also appalled. That it is not possible for Tareq Alaows to run for the Bundestag without putting his own safety and that of his family at risk, mentions Göring-Eckardt on Twitter “Highly shameful for our democratic society”. Your demand: “We have to counter such racist hostility even more effectively!”

First report from Tuesday, March 30th, 2021, 3:49 p.m .: Dinsklaken – The Green Tareq Alaows, who wanted to compete for a Bundestag mandate in the constituency of Oberhausen and Dinslaken, has withdrawn his candidacy. On the Dinslaker Greens homepage, “especially the security of those closest to you” is named as the reason for this. Meanwhile, support for Alaows is growing, the hashtag # SolidarityMitTareq is trending on Twitter.

Tareq Alaows himself cites “the high level of threats for me and especially for people close to me” as the most important reason for withdrawing his candidacy for the Bundestag. He was “frightened” by the “massive experiences of racism” he had had since the beginning of his candidacy: “My candidacy showed that we need strong structures in all parties, politics and society that counter structural racism and those affected help.”

Tareq Alaows, who fled Syria to Germany six years ago, is withdrawing from the Bundestag candidacy

Alaows, who fled Syria to Germany six years ago, sees positive aspects of his willingness to run for the Bundestag. The great public attention he received for his candidacy showed “what can be possible for us, refugees.” In society, “unfortunately there is a lack of non-discriminatory spaces in all areas of life.” His appeal: “It is up to us all to do this specifically to tackle and change in our environment. “

Despite his retreat, forced by racists, Tareq Alaows thanks all those who have accompanied and supported him on his way. He has experienced many situations that have given him “great hope”. That applies to his party “and outside”, he specifically mentions individuals, civil society and his team. The Oberhausen and Dinslaker Greens take the announcement with disappointment and understanding: “We would have liked to continue to argue with Mr. Alaows as our Bundestag candidate for a humane asylum and migration policy. Unfortunately this is no longer possible due to the tense security situation. ”

For his decision to withdraw from his Bundestag candidacy for the sake of the security of those close to him, Tareq Alaows “deserves our respect and our support.” There is enough time for “setting up a new Bundestag candidate”, says the Green Dinslaken website. While Alaows himself has withdrawn from the public with immediate effect and has been asked to refrain from press inquiries, there is broad support and support for the Green politician on Twitter.

.@Tareq_Alaows withdraws his Bundestag candidacy due to racist hostility and the threat to his family. That doesn’t just make you sad, it makes you angry. Can we send a signal of solidarity on Twitter? Hashtag: # SolidaritätMitTareq

The Green MEP and refugee aid worker Erik Marquardt tweeted: “Tareq Alaows is withdrawing his Bundestag candidacy due to racist hostility and the threat to his family. That doesn’t just make you sad, it makes you angry. Can we send a signal of solidarity on Twitter? Hashtag: # SolidarityMitTareq. “And his appeal does not go unheard. The hashtag # SolidaritätMitTareq is in first place in Germany.

Terry Reintke, also for the Greens in the European Parliament, tweets: “Racist hatred undermines democracy. That may be more obvious today than usual. But it’s true every day. The news of Tareq’s withdrawal concerns us all. And we all have to make sure that we make rooms safer and more inclusive. “Eileen O’Sullivan, former top candidate of the pro-European party Volt for the local elections in Frankfurt, agrees:” That must not be a reality. But it is. Shows # solidarity with Tareq. Such intimidation has been going on for years and is a threat to our democracy. It has to stop. Get louder, people! “

The Twitter account of the refugee initiative Seebrücke writes: “Our society is not able to protect people like Tareq, who fight with heart and soul for their issues. We have to fight racism and hatred even more resolutely and create spaces in which people who have experienced racism can feel more secure. ” Ali Khademolhosseini, European coordinator of the global organization of young greens feels personally affected: “Many have said what can be said about the resignation of Tareq Alaows. For me, someone who has only lived in Germany for 5 years and is politically active, this is a horror scenario!
But also a call to fight against racism, hatred and fascism! “

One also shows why Tareq Alaows no longer wants to run for the Bundestag Tweet of the AfD MEP Bernhard Zimniok. He writes of “racism allegations that are not substantiated” in order to “swindle a # Solidarity with Tareq in the Greens’ bubble.” The AfD politician refers to a report by “Spiegel” in which it says that Alaows die had applied for German citizenship and his lawyers were convinced that this would be granted by the Bundestag election in September. Zimniok turns it into: “According to Spiegel, Mr. Tareq still does not have citizenship, so he shouldn’t run for office anyway. “His closing words:” Wonderful. “(Mirko Schmid)

Look for legends with Shiny Nasgnet

State center reports incidence decrease of 19.9 – the value is...

168 million children have been out of school for almost a...