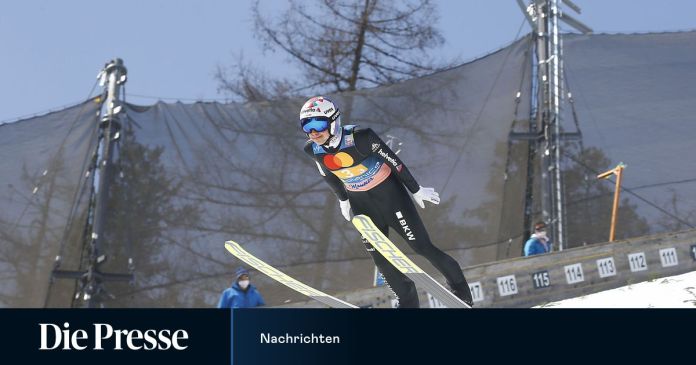 Daniel Huber previously brought Austria into the lead with a personal best. The German team withdrew before a possible continuation.

The ski flying team competition at the World Cup finals in Planica was canceled on Saturday after 21 of 36 jumpers in the first round. Before that, there had been enormously different distances due to strongly changing wind conditions, so Daniel Huber sailed to the maximum distance of 236 m, others like Markus Schiffner did not even reach 190. After several long interruptions, the competition was finally canceled by the jury.

Germany would not have competed in a possible continuation. Austria left this option open depending on the current circumstances, but this no longer occurred due to the termination. “That was the only right decision, it was just too turbulent,” said Mario Stecher, the sports director of the jumpers in the ÖSV, welcoming the jury’s decision.

At the start of the season finale on Thursday, Daniel Andre Tande had a serious fall. The Norwegian was put into an artificial coma after a hard impact, and on Saturday the 27-year-old was supposed to be gradually awakened from deep sleep in the Ljubljana hospital. “Tande’s fall is still in everyone’s bones,” said Germany’s head coach Stefan Horngacher, justifying his athletes’ withdrawal from the team competition.

ÖSV head coach Andreas Widhölzl regretted the cancellation, but also joined the security concerns. “It is a shame that the weather was so unstable. But safety comes first, we are on one of the largest hills in the world. I am very clearly in favor of the safety of the athletes. We have already had a fall at clearly less wind, “said Widhölzl, recalling the Tande accident.

Huber was of the same opinion. “It’s a shame, but after what has happened these days, you don’t have to provoke it, it was definitely the best decision,” said the Salzburg native. On Sunday (10 a.m. / live ORF 1), an individual competition is scheduled to conclude.

Man cuts hedge: Suddenly he sees a creature in it that...

Corona update from the districts: Admiralspalast becomes a test station –...

Migros no longer compensates for wage losses through short-time work

Samsung is working on a double-fold smartphone Winter transfers at Bayern? Coach Hansi Flick with a clear...