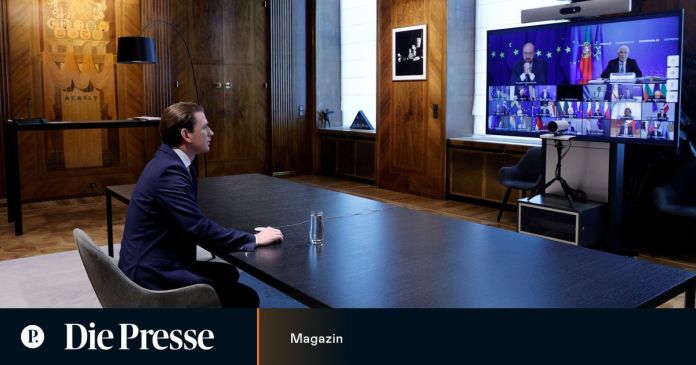 The Chancellor warned of “damage to the EU” and threatened with a veto. Who now gets how many doses of vaccine, that should now be solved at the EU ambassador level.

What everyone else wanted to prevent happened because of the irrefutable stance of Chancellor Sebastian Kurz: The 27 heads of state and government of the EU had to argue at their video conference held on Thursday about whether and to what extent vaccine doses were redistributed to a handful of states who are not getting anywhere in their national vaccination campaigns because of AstraZeneca’s delivery failure. In the clear view of all other Member States, Austria does not belong to this group. But Kurz insisted right up to the end that he would also be supplied via the quota due to Austria, and, according to consistent information from three EU diplomats from three different countries, threatened not to support the joint final declaration – and above all the entire solidarity redistribution in favor of the five latecomers to block.

In the late evening, after around seven hours of video conference, an initial agreement was reached. The heads of state and government agreed to use ten million additional doses of vaccine doses from Biontech / Pfizer to compensate for existing differences in distribution. “After numerous states have spoken out in favor of more justice and solidarity, there was a joint resolution that the ten million additional doses of vaccines would ensure a fairer delivery of vaccines in the EU in the second quarter,” Kurz said in a broadcast, “happily , relieved and satisfied “.

The 27 member countries delegate the exact distribution to their EU ambassadors in Brussels. “We will not play the steering group ourselves,” said German Chancellor Angela Merkel, according to an ear witness at the conference. Briefly, EU Council President Charles Michel thanked the Portuguese Council President Antonio Costa and Commission President Ursula von der Leyen for their efforts to find a good solution for everyone.

Specifically, it is about help for Bulgaria, Latvia, Slovakia, Croatia and possibly the Czech Republic, said a diplomat to the “press”. For cost and logistical reasons, when ordering vaccines, they relied almost exclusively on the AstraZeneca product. The fact that in the first three months of this year, instead of the contractually promised at least 90 million cans, the company has only delivered just under 19 million cans, confronts these five states with even greater problems than the other 22.

EU summit agrees on climate target of minus 55 percent

Because of amnesty for gun hoarders: AKK is investigating the KSK...