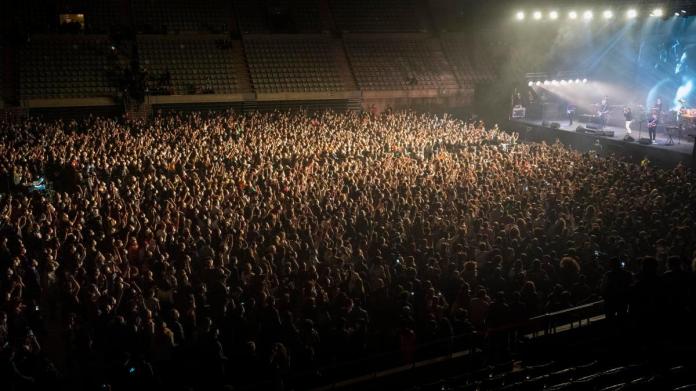 Here comes the sun: When the concert should have started long ago, but there were still people queuing outside, the Beatles classic was playing in the hall. People cheer, clench their fists, throw their hands in the air, dance close together. Fall into each other’s arms. Or just shine at each other.

Yes, here comes the sun. For around 5000 music fans this Saturday evening in the Palau Sant Jordi on Barcelona’s local mountain Montjuïc – and if things go well, worldwide for an industry that suffers from the spreader flaw like no other. At least, however, it is considered a signal of hope: the first major concert without social distance in the western world since the outbreak of the corona pandemic.

“I’m about to cry,” calls out singer Santi Balmes

“Welcome to one of the most emotional concerts of our life, I’m about to cry”, Santi Balmes, singer of the band “Love of Lesbian”, finally greets the crowd. He’s wearing a T-shirt that says: “Putas Ganas,” damn goat. Like all artists, he had been sidelined for a good year.

But who plays here, he’ll say it himself at the end of the evening, doesn’t really matter. What matters is that there is this evening. The tickets were sold out in a few hours, and the historical dimension lies in the extra fresh air in the hall. At the end Balmes will shout: “Now you can say forever with a big smile: ‘I was there.'”

To make history, it takes courage, creativity, perseverance and – in times of pandemics – an above all plan. In this case it consisted of constructing a “one-day city”, as co-organizer Jordi Herreruela told WELT. The city’s music and festival promoters have been working on a corresponding concept since April 2020 and the authorities have processed it with it. But a “technological leap” was needed to implement it.

It came in the fall with improved antigen tests. These can still not completely rule out false negative results; but that someone with a contagious amount of virus tests negative. At least that was the result of an extensive experiment carried out in December by experts at the Germans Trias i Pujol hospital with cross-checks using PCR tests.

An event of 500 people in the Apolo discotheque was staged without social distance, but nonetheless without any contagion. The concert of “Love of Lesbian” is now the calculated extension of this party zone. The same scientists supervised the concert of the event, and politicians also agreed. “There is nothing crazy or daring behind this initiative,” says Herreruela, “but rigor and know-how.”

Saturday morning, childish friends and a pioneering mood at the “Razzmatazz” club in the former industrial district of Poblenou in Barcelona. Volunteers stand in front of the turntables and dozens of test booths under the disco ball. If you have a ticket for the concert in the evening, you have to activate it during the day with a negative antigen test, you have been given an appointment in one of three dance halls and a personalized test code linked to the ticket via a mobile phone app.

After the course through the disco, the test persons wait at the exit for their result. Collective stare at the cell phone, then a short grin or a cry of relief when exactly fifteen minutes later the result appears on the display. Green for negative – only four of the around 5000 tests were positive, and that too will be announced by singer Balmes from the stage in the evening.

Hardly a song change goes by without reference to the Subject: Corona. It is always present anyway thanks to the white FFP2 masks, which are insisted on as a double safeguard. From above, they make the crowd look like a dancing lunar landscape. Anyone who briefly pushes up the mask is immediately warned by plainclothes inspectors. Perhaps this is the concert aesthetic of the future, just as the lights on smartphones were once new.

Not an old normal either: Drinks can only be taken at bars next to the hall, and in view of the chilled circulating air, nobody really manages to sweat. The hall is as clean as it gets. Even a robot was hunted down beforehand that disinfected them with ultraviolet light.

On the other hand, the crowd swirls like it always has. Girls sit on their boys’ shoulders, hands fly from left to right and back again. The light show bathes the audience in blue, red, pink, purple, and from the originally planned separation into sectors of the hall, which normally holds almost 20,000 spectators, there is soon not much to see: everyone is drawn to the stage.

“We didn’t wait for the authorities, we kept making suggestions”

The band can be asked for an encore as usual, and at the end it says, according to the old ritual: “Thank you, Barcelona!” If everything goes well, that is, contagion-free, then this sentence may still be said often and in many places.

“The whole world is watching this concert”, believes Herreruela, he speaks of the “Olympic spirit”. It still has more positive connotations in Barcelona than elsewhere: the summer games of 1992 transformed the port city into a modern metropolis and, with their iconic venues on Montjuïc, the cheerful atmosphere and perfect organization, are still widely regarded as the best in history.

“Creativity, citizenship and creativity, everyone working together – we have now regained this spirit,” says Herreruela, head of the Cruïlla music festival and one of the main characters in “Cultura Segura”, as the initiative is called: Safe culture.

In fact, it is hardly a coincidence that Barcelona have dared to take the step forward. Catalonia sees itself particularly as a cultural region. Besides the schools, the museums were the only ones that never closed in the second and third waves. Theaters and cinemas were allowed to reopen before the restaurants. In addition, there is a technological open-mindedness, a self-image as “Smart City”: With test data management via mobile phone app, for example, very few have a problem here.

But above all there was the music scene itself. “We didn’t wait for the authorities, we kept making suggestions,” says Herreruela. The organizers accepted the enormous logistical effort as well as a loss: just under half of the approximately 200,000 euros in costs could be refinanced through ticket sales.

When and whether the investment pays off? Primavera Sound and Sonar, the big summer festivals, have already canceled for 2021 despite their participation in the pilot project. They have a strong international focus in terms of line-up and visitors. Herreruela, on the other hand, wants to try his Cruïlla; the independent festival traditionally attracts a more local audience. In July, a mixed concept of already vaccinated visitors and antigen tests will target 25,000 people and a three-day city.

“This bubble is closing now,” says goodbye to “Love of Lesbian” singer Balmes in Palau Sant Jordi. On the balcony of the hall people stand for one last cigarette, the city at their feet. Like back then at Olympia, like before after concerts. Or maybe not. The cigarettes are put out quickly, the bar closes, everyone has to go home, from ten o’clock the curfew that has been imposed for many months will apply again. The Germans can go to Mallorca over Easter, but the Spaniards have to stay in their regions.

In two weeks there will be scientifically proven findings about the success of the project. For now the memory remains, of the lights and the noise, the amazement and the laughter. A couple of hours of magic, a touch of rock ‘n’ roll.

Protests in Stuttgart: police dissolve demo due to corona violations –...